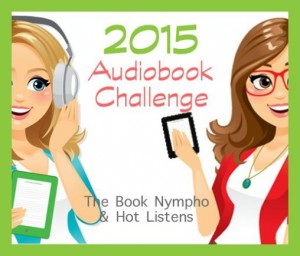 Since I’m an audiobook junkie it makes sense that I’m participating in the 2015 Audiobook challenge! I signed up for the Marathon level (50+) and as of this update I’m halfway there!

Girl in a Band by Kim Gordon, performed by the author

The Last Time We Say Goodbye by Cynthia Hand, performed by Julia Whelan

Before I Go by Colleen Oakley, performed by Rebecca Lowman, Kirby Heyborne

Silver Screen Fiend by Patton Oswalt, performed by the author

In Some Other World, Maybe by Shari Goldhagen, performed by Amy McFadden

The Strange and Beautiful Sorrows of Ava Lavender by Leslye Walton, performed by Cassandra Campbell

The Scar Boys by Len Vlahos, performed by Lincoln Hoppe

All the Bright Places by Jennifer Niven, performed by Kirby Heyborne, Ariadne Meyers

We Should Hang Out Sometime by Josh Sundquist, performed by the author

Everything I Never Told You by Celeste Ng, performed by Cassandra Campbell

I listened to about 100 audiobooks last year, and so far I’m tracking to hit that milestone again. I do have some reviews to catch up on though!

How’s your listening going this year?