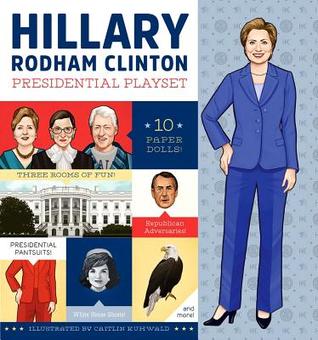 It may not be an election year, but you can cast your vote early with the Hillary Rodham Clinton Presidential Playset! This fold-out book features replicas of the Oval Office and other White House locations, plus perforated paper dolls of Hillary Clinton and all of her political pals and adversaries. Be HRC’s chief of staff as she takes questions at the press podium, hashes out tough negotiations in the Situation Room, or even consults with the ghost of Abe Lincoln. Complete with a pop-up cast of characters and accouterments (Bill comes with a lawn mower to keep him busy), this fun and feminist-friendly playset is perfect for Hillary fans young and old.

On sale today is an entertaining presidential paper doll set featuring Hillary Clinton. Quirk Books sent the playset to me so I could check it out and stage my own presidential scenes. The Hillary Rodham Clinton Presidential Playset includes ten paper dolls, 3 rooms and plenty of accessories.

I posed Hillary in her “Badass Executive Elegance” look on the White House lawn. She’s hanging out with her top advisors Oprah Winfrey and Bono, along with Ruth Bader Ginsburg and the ghost of Jacqueline Kennedy Onassis. First Gentleman Bill Clinton wants to get in on the fun too, though it doesn’t look like he was invited to the party:

Also included in the set are the Oval Office and Situation Rooms, the seat of power, bully pulpit, and Republican adversaries. (No Trump though!) You can pose Bill Clinton with a saxophone or lawn mower and dress Hillary in a variety of pantsuits, presidential PJ’s or formal attire.

This is a fun, feminist set that would make a great gift for Hillary fans- they can pull out the playset while watching the debates. Hey, maybe paper dolls will be the next craze like adult coloring books!