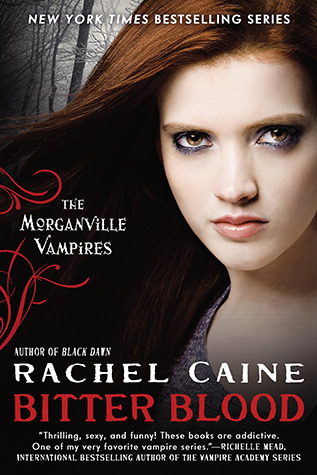 We’ve come to lucky #13 with Rachel Caine’s Morganville Vampires series. I feel like with each new book I’m bracing myself for the inevitable heartache and game changers that face Claire and her friends.  And this installment is no different – the whole book has an ominous feeling to it. The scene in Morganville is even more unsettled than usual and felt more than ever like no one was safe. And now with only two more books to go Caine is going all out with the shocks.

In Bitter Blood, the vampires are now more bold and fearless than ever, and not willing to cut the humans any breaks. Eve and Michael’s relationship is causing all kinds of trouble for the residents of the Glass House. And Morganville is getting in on the election year fun by holding mayoral elections of their own.  And besides all that a TV ghost hunting crew is in town looking for material – uh, they will probably get more than they bargained for.

The book is written in multiple POV again, with Claire’s POV covering the lion’s share of the book. And this is the first time that everyone’s favorite mad genius, Myrnin, gets to narrate. He shares tidbits of his past too so it’s quite a treat. Amelie, Oliver, Shane, and Michael also share their perspectives. Since this is such a long-running series it’s fun to have a narration change of pace and learn more about different characters.

It’s always a pleasure returning back to Morganville, like visiting old friends. The first half of the book had me tied up in knots waiting for something to happen. I liked catching up with all the characters but must admit the book wasn’t capturing my full attention at first. It was like the calm before the storm I guess. But then things got good and I couldn’t put it down. Caine was really playing games with my heart with these romantic entanglements too! She has me questioning my alliances at this point.

Claire has shown tremendous growth throughout the series, and I was proud of the way she took charge and handled some of the challenges in this book. She’d be my mayoral candidate for sure, though I don’t know why anyone would want that job.

As always, the book ends with a big twist- and I can’t imagine what the next book will look like but I have faith that Caine will work her magic with it. The penultimate installment, Fall of Night, will be out May 7th.  I already miss this series.