Sidelined is about Genna, a high school basketball star with a bright future. She’s got the world at her feet, and even the guy of her dreams has finally noticed her. Everything crashes around her, however, when a game injury threatens her career. Plus, her parents’ marriage is in shambles. With life spiraling out of control she turns to pain pills to help her cope. Can she get out from under this downward spiral? 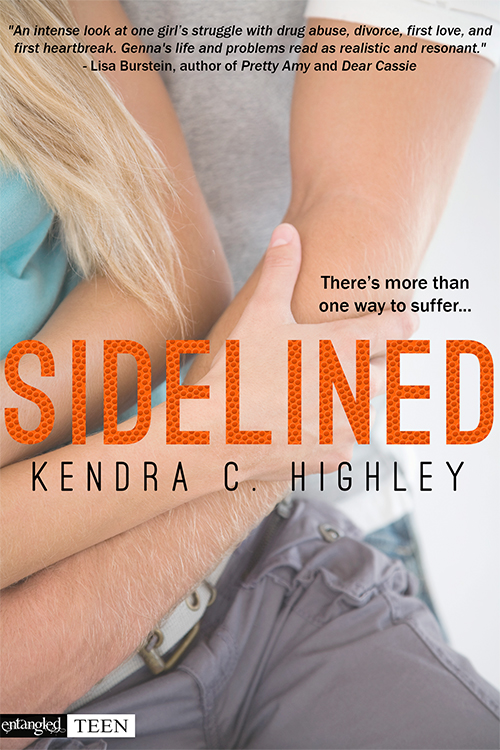 There’s more than one way to suffer…

After being pushed to excel her entire life, high school basketball star Genna Pierce is finally where she wants to be. University scouts are taking notice, her team is on its way to the state tourney, and Jake Butler, the hot boy she’s daydreamed about since ninth grade, is showing some definite interest. When he asks her out and their relationship takes off, Genna believes things can’t get better.

A freak accident ends her career before it’s even begun. Her parents are fighting more than ever, her friends don’t understand what she’s going through, and she’s not sure who she is without basketball. And while he tries to be there for her, Genna doesn’t understand how Jake could ever want the broken version of the girl he fell for.

Her life in a tailspin, Genna turns to the only solace that eases her pain: Vicodin.

I don’t know why but I had it in my head that this book was a sports romance. Romance does play a part, but the book is more about Genna’s battle with Vicodin addiction. I broke my wrist last year and received a bottle of Vicodin for pain management, and I can see how addiction could easily become a problem. When I ran out of pills I was tempted to ask for more (and Genna does some doctor shopping to score more) but switched to OTC pain meds instead. Sidelined sheds some light on a different kind of drug addict, and shows that drug addiction can easily happen to anyone.

Genna’s fall from grace is fast and furious. I was sympathetic to Genna’s situation, but it was hard to watch how she handled things, realistic or not. The situation and drug addiction makes her very emotional and reckless. Since we see her “before” we can see how out of character her behavior is.

Genna’s journey shows how easy it is to fall into addiction. She lost so much and so fast that it was hard for her to get through the day and her pill use rapidly increases. She didn’t know who she was anymore if she wasn’t the basketball star. Her relationship with Jake is so new she doesn’t want to show this dark side of herself to him. And there’s a lot of baggage with her parents so she can’t let them in either.

Genna is trying to find her way and forge a new path in life, and she also has to deal with her new family dynamic. Her relationship with her mother is tense at best – she wanted her to fulfill her own basketball career aspirations. Genna’s home life is messy to say the least but I liked how the characters evolved throughout the book.

In Sidelined we see the physical and emotional scars of an injured athlete. Sometimes dreams fall through for whatever reason, so I think Genna’s story is very relatable. We see the personal, emotional, and legal consequences of drug addiction in a straightforward, non-judgmental way.

Sidelined is a quick, easy read about finding that silver lining when everything falls apart. I wouldn’t pick it up for the romance, but if you like sports-themed contemporary you might give it a shot.

Sidelined is a YA Fiction Cybils nominee.