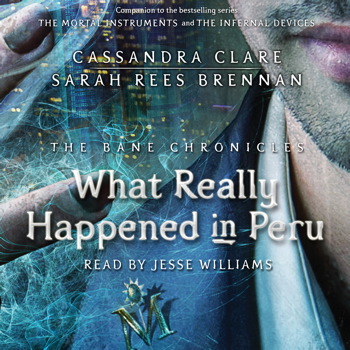 The Bane Chronicles is a new novella Shadowhunter world spinoff series from Cassandra Clare and co-authors Sarah Rees Brennan and Maureen Johnson. The first of 10 short stories about my favorite warlock Magnus Bane kicks off with What Really Happened in Peru.

Magnus Bane is such a scene-stealer in all the Shadowhunter books that it’s nice to see him in the spotlight for a change. These bite size standalone stories fill in some of the blanks in Bane’s extensive backstory and help tide us over until the next Shadowhunter book.

This installment teasingly tries to answer the question posed in the title with comedic, sorrowful and insightful anecdotes. It’s a good bonus addition to the Shadowhunters legend and a must for those who can’t get enough of Magnus.

Super fans of The Mortal Instruments series know that Magnus Bane was banished from Peru. I didn’t remember that tidbit, but after doing some digging I think it’s mentioned in City of Fallen Angels? In What Really Happened in Peru, Magnus visits Peru with his warlock cohorts Ragnor Fell and Catarina Loss. Magnus gets involved in several antics there, but which was the final straw? (Seriously, which was it?)

This quick read answers some questions about the mysterious Magnus while also providing the silliness you might expect. There are exotic animals, bad dancing, drunken exploits and stolen kisses. With Magnus’ immortal status he has had his share of heartbreak though, some of which we learn about. The story jumps around in time and gets a little confusing at times, but I guess it’s to illustrate all the exploits Magnus gets involved in over the years.

Jesse Williams narrates What Really Happened in Peru. This is his first time narrating an audiobook- he is best known as Dr. Jackson Avery on Grey’s Anatomy, of which I’m a fan. Williams has good comedic timing for Magnus, something we don’t get to see a lot of on Grey’s. I think Williams understood the character of Magnus and had fun with it. There are a lot of different characters, accents, and time frames in this installment, so Williams gets to get creative with the narration. I preferred his male voices overall, but I liked that he’s animated and really got into the story. At just over an hour, I’m pretty sure this is the shortest audiobook I’ve ever listened to, but I do think Clare’s books lend themselves well to audio.

The next book in the series is The Runaway Queen, co-written by Maureen Johnson, due out May 21. It’s set during the French Revolution, when Magnus tries to rescue the royal family.

Check out an interview with Jesse Williams discussing the audiobook at MTV and listen to an audio sample below:

13 thoughts on “What Really Happened in Peru Audiobook Review”