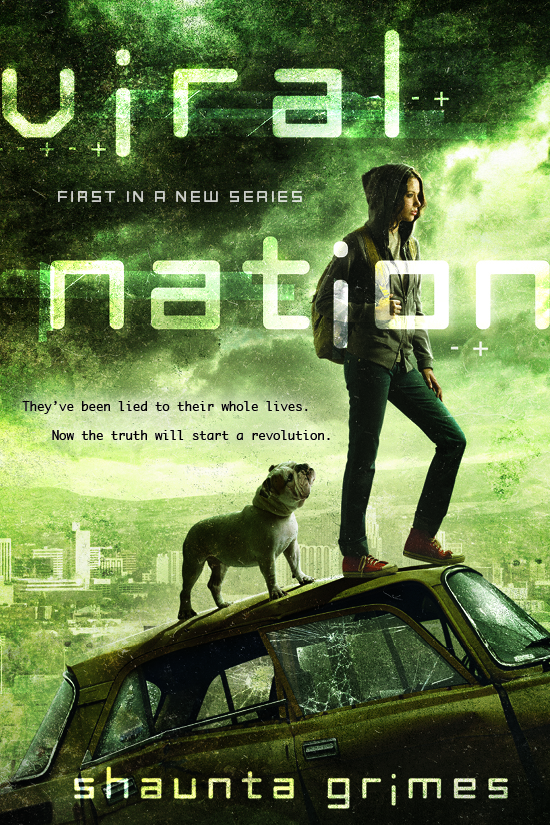 I’m excited to welcome author Shaunta Grimes to the blog on the occasion of her debut VIRAL NATION, in stores today! Shaunta stopped by to answer a few questions about the book, and you’ll also get the chance to win your own copy of Viral Nation!

Hi Shaunta! Thanks for answering a few questions about your debut release, Viral Nation.

Your heroine, Clover, is an autistic teen. Has your life been touched by autism, and what are some things that are not understood about the disease that you want readers to know?

My son has autism. One thing that I really wanted to Viral Nation to do was to show that people with autism are not so different from everyone else.  Autism isn’t a disease. It’s a difference. Everyone has differences, it’s just that some are more obvious than others.

Clover has an adorable service dog named Mango- have you had any personal experience with service animals?

I don’t have any experience with service animals. I have been able to see over the last ten years how important it is to a kid with autism to be able to connect and bond unconditionally with an animal. My son was given a kitten when he was nine. It’s been kind of amazing to see what a difference it made for him. Angel loves him best, loves him even if social stuff is hard for him, loves him no matter what. He doesn’t ever have to worry about whether or not she’s on his side. She always is. That’s what Mango is for Clover. Unconditional, blind-love friendship.

I loved writing Clover and West, and their relationship. Also Clover and Jude’s relationship. Clover is the common denominator. I loved writing the way she navigates her world. One of my favorite scenes to write was the one where Clover meets Jude in the future. She struggles with social stuff in the best of situations—dealing with someone who knows her much better than she knows him was fun to write.

Even though Viral Nation is your first published book, have you written other books on your road to publication?

Viral Nation was my fourth novel. The other three were—learning novels. I think the most important thing for someone who wants to write is to keep going and to make sure that you learn something from everything you write.

What current authors inspire you to write?

Does the title Viral Nation have any meaning for you beyond the viral attack? Like, say, viral videos?

Viral Nation wasn’t my working title for the book. I actually really suck at titles. Really. Luckily the amazing people at Penguin don’t. I think that Viral has multiple meanings. Obviously, it refers to the Virus in the book. But also, the idea that the revolution will spread the way a viral video does. One person to the next.

Bonus question – Are there any songs that inspired you when you were writing Viral Nation?

The one song that I listened to a lot when I was writing Viral Nation was “Raise Your Glass” by Pink. The kids in my book call themselves The Freaks, and it just fit.

Thank you for taking the time to answer these questions, Shaunta!

Shaunta Grimes has worked as a substitute teacher, a newspaper reporter, a drug court counselor, and a vintage clothing seller. No matter which direction she strays, however, she always comes back to storytelling. She lives in Reno with her family, where she writes, teaches, and perpetually studies at the University of Nevada. Viral Nation is her debut traditionally-published novel.

After a virus claimed nearly the entire global population, the world changed. The United

States splintered into fifty walled cities where the surviving citizens clustered to start over. The Company, which ended the plague by bringing a life-saving vaccine back from the future, controls everything. They ration the scant food and supplies through a lottery system, mandate daily doses of virus suppressant, and even monitor future timelines to stop crimes before they can be committed.

Brilliant but autistic, sixteen-year-old Clover Donovan has always dreamed of studying at the Waverly-Stead Academy. Her brother and caretaker, West, has done everything in his power to make her dream a reality. But Clover’s refusal to part with her beloved service dog denies her entry into the school. Instead, she is drafted into the Time Mariners, a team of Company operatives who travel through time to gather news about the future.

When one of Clover’s missions reveals that West’s life is in danger, the Donovans are shattered. To change West’s fate, they’ll have to take on the mysterious Company. But as its secrets are revealed, they realize that the Company’s rule may not be as benevolent as it seems. In saving her brother, Clover will face a more powerful force than she ever imagined and will team up with a band of fellow misfits and outsiders to incite a revolution that will change their destinies forever.

Congrats to Leslie and Tabitha who won paperback copies of Viral Nation!