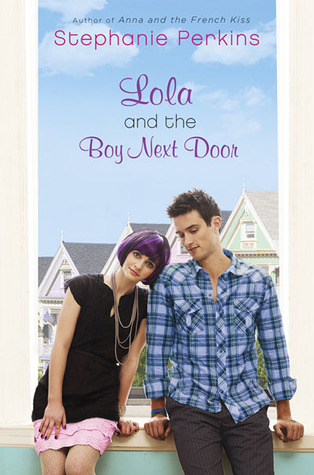 Book: Lola and the Boy Next Door by Stephanie Perkins, Dutton, September 29, 2011

Series: Companion book to Anna and the French Kiss

Anna and the French Kiss is one of my favorite recent contemporary reads so I was eagerly anticipating the companion book’s release. Happily, Stephanie Perkins pulled off a great follow up to Anna. Even with a new cast of cast of characters, the feel of the story is just as charming and captivating and left me completely satisfied.

Lola is a quirky and flawed yet endearing main character. She’s confident and outgoing and likes to have fun with her clothing choices and dress up in wigs and her own fashion creations.  She’s 17 and lives in a San Francisco Victorian with her two dads, and has a part time job and a loyal best friend. Her love life is heating up with her rocker boyfriend Max, and things are going pretty well until her old crush Cricket Bell moves back next door and then things start to get complicated.

Part of the book’s charm is due to the unconventional characters. The main character Lola isn’t perfect, and her decisions can be rash and infuriating at times, but I liked that she seemed authentic. The supporting characters are fully detailed and help to enrich the story. I loved Lola’s family especially. Her two dads are a great support system for her, and it’s great to see her interactions with her involved parents, which is something we don’t see too often in YA. As a bonus, it is fun to see some familiar characters from Anna turn up in this book and interesting to see how outsiders view them. The funny thing is that I thought I would miss Anna and St. Clair from the previous book, but as I became involved with this story, I was less interested in their lives and more taken with the current cast. You get the best of both worlds with the overlap of characters past and present.

The story is set in the Bay Area and all the details written into the story lend an air of authenticity that as a former San Franciscan I enjoyed a lot. It’s not Paris, but San Francisco has its charms as well. This setting is more grounded and relatable in a way.

Stephanie Perkins again impressed me with the way she writes slow building romance, with the longing looks and sexual tension that leaps off the page. This author is great at capturing the small moments in a relationship and the feel of first love. As the boy next-door, Cricket is smart, sweet and tall, and fashion forward in his own right. Mainly he’s a nice, normal guy, which can be a rarity in itself in YA books. The author takes advantage of his close proximity next door by creating cute, special opportunities for them to interact. These characters will make you melt. Fans of the first book should fall in love with this couple just as much as Anna and St. Clair.

I wager you will enjoy this book if you like YA contemporary romance, the book Anna and the French Kiss, and books with quirky characters. It’s hard to perfectly capture the magic formula that is the first book, but I found Lola and the Boy Next Door a treat to read all the same.  Look for Lola to hit stores September 29. The final companion book Isla and The Happily Ever After brings the setting back to Paris, and it will be released in Fall 2012.