June is Audiobook Month and as you may know I’m a big fan. Today I’m so thrilled to partner with the APA to offer an audiobook giveaway of the 2014 Audie Award Teen winner!

All this month blogs are celebrating the winners of the 2014 Audie Awards (APA award recognizing distinction in audiobooks and spoken word entertainment) with a giveaway. You can follow along with the tour by following #Audies2014 on Twitter.

I listened to all the Teen Audie nominees this year for The Armchair Audies, and I’m so pleased to offer a giveaway of the winning audiobook: 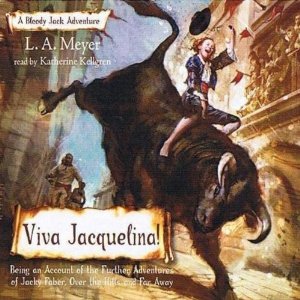 The vivacious Jacky Faber return in the 10th tale in L. A. Meyer’s Bloody Jack series! Once again under the thumb of British Intelligence, Jacky is sent to Spain to spy for the crown during the early days of the 19th-century Peninsular War. She finds herself in the company of guerilla freedom fighters, poses for the famous artist Goya, runs with the bulls, is kidnapped by the Spanish Inquisition, and travels with a caravan of gypsies…all while hoping to one day reunite with her beloved Jamie Fletcher.

Listen to a sample of Viva Jacquelina!

This audiobook is a blast to listen to! Katherine Kellgren goes the extra mile with her narration. She sings, uses different accents, and puts a lot of personality into her performance.

Also, be sure to visit Miss Susie’s Reading & Observations tomorrow for the Thriller/Suspense giveaway! You could win a copy of The Hit by David Baldacci, read by Ron McLarty and Orlagh Cassidy, from Hachette Audio.

The giveaway has ended – congrats to Yvonne who won a copy of Viva Jacquelina!