The Movie Date is a weekly feature where we discuss movies that may appeal to the YA audience. Andrew is The Reading Date’s resident movie critic and this week he discusses Snowpiercer, directed by Bong Joon-ho. 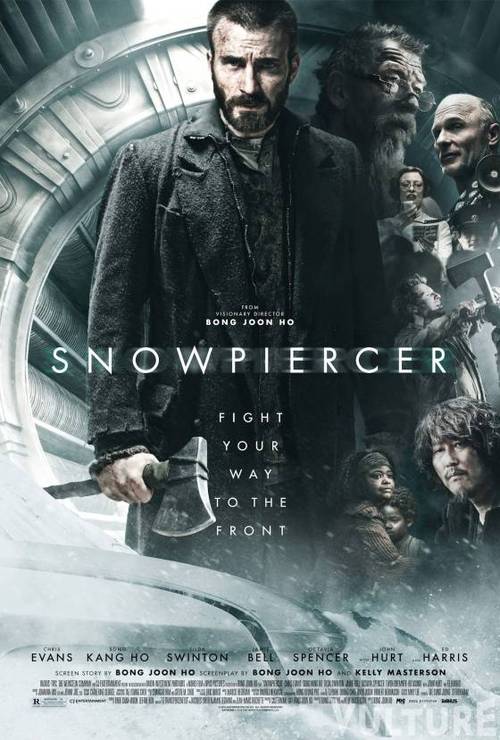 As a nonstop perpetual-motion train makes its yearlong run around the globe, a tortured rebel leads a revolt from the impoverished tail to the wealthy front to meet the founder.

I wouldn’t normally review a sci-fi action picture for The Movie Date, but there’s something else going on here, too. There’s so little concern with known science or reality that this really has to be taken as a futuristic fable; as such the film has an almost literary quality. If you have to choose a genre, this would be a dystopian rebellion film like 1984 and V for Vendetta (and like those two films, it includes John Hurt in the cast).

Years ago, the earth froze suddenly, killing nearly all the human race. The few survivors boarded the train Snowpiercer, which for 18 years has been hurtling around the globe nonstop, via some mysteriously powered engine, to avoid freezing solid. But it’s not one big happy family; it’s definitely a class-based society, with the rich folks occupying most of the train and the impoverished masses crowded into a windowless ghetto at the back. The tailies are fed ugly, gelatinous protein blocks and otherwise kept alive, but their young children are regularly kidnapped.

Grizzled amputee Gilliam (Hurt) encourages angry Curtis (an initially unrecognizeable Chris Evans, Captain America) to lead a revolt and seize control of the train. As the revolution erupts unexpectedly, Curtis and Gilliam are joined by a missing kid’s mom (Octavia Spencer, The Help) as well as a drug-addled Korean security engineer and his loopy, clairvoyant girlfriend. On the government side, trying to talk some sense into the huddled masses is goofy spokeswoman Mason (Tilda Swinton, very much in the Effie Trinket mode). But can she halt the inexorable march towards the train’s nose and the confrontation with shadowy genius Wilford (Ed Harris)? And if the train’s function turns out to be corrupt and unacceptable, how else will the rebels survive?

Clued-in IMDb readers call it “a cinematic microcosm of society” while doubters note only the “plot holes galore.” As our grimy rebel army tromps through the gleaming train, revealing greenhouses, swimming pools, and dance clubs, I couldn’t help but wonder, “where are the bathrooms? Where does all the meat come from?” But I’m getting good at ignoring such concerns: science and verisimilitude aren’t the point here. This is pure metaphor for the class struggle, and the interdependence of the haves and the have-nots is portrayed with greater complexity than last year’s overly simplistic Elysium. I hope it’s not a spoiler to say that what you think is going to happen (the rebels move from the back of the train to the front) is exactly what does happen. Still the film keeps you guessing: how did our planet freeze? Who’s driving the train and why? What’s the solution to this dilemma?

This globe-spanning tale has suitably international origins; it’s based on a French graphic novel discovered by quirky Korean director Bong Joon-Ho, who eventually shot the film in the Czech Republic. Though it’s a (literally) linear, highly commercial action picture, the effect is utterly unlike most summer blockbusters thanks to its audacious, bizarre premise and some strong emotional moments. I found myself completely caught up in the world portrayed, and the cool arctic setting was a refreshing blast during these tepid summer months.

Snowpiercer is now playing in limited release and VOD. This film is Rated R and runs 126 minutes.

3 thoughts on “The Movie Date: Snowpiercer”