Merry Christmas, dear readers and movie fans! In December we usually catch up on movie viewing, and reading slows down a little. (Have you been feeling a little too tired to read lately too? All I can manage is guilty pleasure reading.) Today we have an (unconventional) Christmas-themed movie to chat about!

The Movie Date is a weekly feature where we discuss movies that may appeal to the YA audience. Andrew is The Reading Date’s resident movie critic and this week he discusses White Reindeer, directed by Zach Clark. 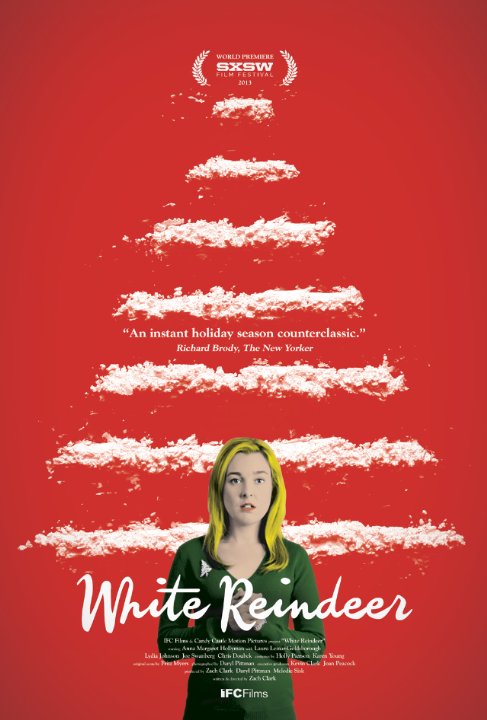 Stunned by tragedy as the holidays begin, a Washington, DC realtor tries to inject joy into her Christmas season through retail spending, shoplifting, and debauchery.

The holidays are just beginning, and Suzanne has every reason to be cheerful: with her TV meteorologist husband’s new job, they’ll be moving to sunny Hawaii in the new year. But her high spirits are dashed when she comes home one day to find her dear hubby Jeff slain in a home invasion robbery. The police can’t locate the suspects and can only offer condolences. Meanwhile a dazed Suzanne goes on with her life, spending thousands of dollars online for colorful holiday apparel and listening to an album of Hawaiian Christmas songs. What she thought would be the best Christmas ever is now likely to be the worst. The drawn, pitying faces of friends and family don’t help much. Nor does unwelcome news from Jeff’s coworker: seems her loving spouse had been having an affair with a stripper named Autumn. She wanders over to the Crystal City Lounge to meet the woman, whose real name is Fantasia; surprisingly there’s no anger or acrimony. In fact, as the story unfolds, the two of them slowly develop a sweet and surprising friendship, even reminiscing about Jeff’s skills in the sack.

Suzanne attempts to bury her sorrow by getting involved in decadent scenes with Fantasia’s stripper friends and her frisky next-door neighbors; she also overindulges in garish yard décor and that awful holiday addiction, the candy cane, none of which helps. Suzanne wants to feel like she did as a child, when she “really believed that there was magic in the world.” To reclaim her life, she must put the tragedy behind her and move on, as a mysterious mentor points out: “Do you want to be the Ghost of Christmas Past or the Ghost of Christmas Future?” 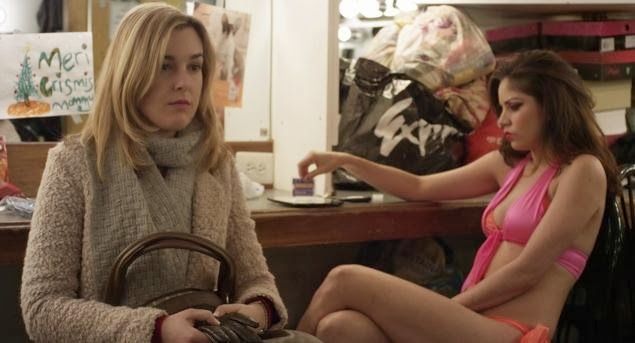 To some degree this is a dark indie spoof on those countless Lifetime and Hallmark movies about working women struggling to find the true meaning of Christmas and/or a handsome holiday fella. But this film pulls no punches; it’s a candid look at the numbness one encounters after a loss, contrasted with the holidays’ elusive joy. Somehow the film manages a lightly comic tone throughout all of this; we’re amused by Suzanne’s weaknesses and are empowered by the strength she displays. It’s a welcome reminder that, while you’re waiting for your own holiday magic to happen, you can still be someone else’s miracle.

Content advisory: I should inform the gentle readership of the Reading Date that this is very much a grownup film; it includes some graphic sexual language and activity, nudity, drinking, drug abuse, and appalling décor. Make sure your children are nestled all snug in their beds, then grab some eggnog and enjoy.

White Reindeer is now playing in limited release, as well as IFC Films On Demand. This film is Unrated and runs 82 minutes.