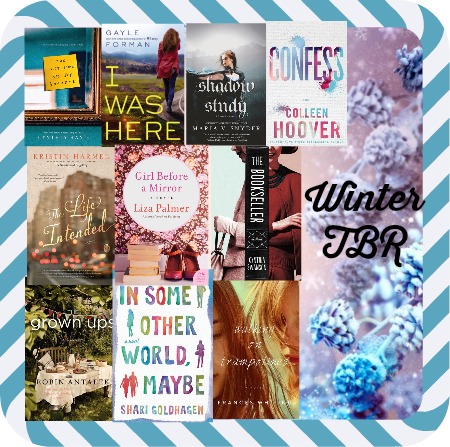 Top Ten Tuesday is an original feature from The Broke and the Bookish. I feel like we just made our Fall TBR lists, and now it’s Winter TBR time! I read 9/10 books on my Fall TBR, so I hope I pick the right books again. This time of year is big for list making, from best of’s to anticipated debuts and sequels. I don’t want to list the same YA books over and over, so with this list I’m focusing mostly on Adult and Crossover titles, and apparently I’m in the mood for angst!

These are the top ten books on my Winter TBR:

1. Girl Before A Mirror by Liza Palmer – A divorced ad exec goes to a romance writing conference on a quest to sign a client and learning how to be the heroine of her own story. Jan. 27, William Morrow Paperbacks.

2. The Life Intended by Kristen Harmel – Kate’s husband died suddenly over ten years ago, and now she’s getting ready to marry someone else. She’s second-guessing herself though, especially when her late husband appears in her dreams every night. Is she meant for another path? Dec. 30, Gallery Books.

3. In Some Other World, Maybe by Shari Goldhagen – In 1992 three groups of teenagers see a film at the same theater, and their lives intersect over the next two decades. Jan. 13, St. Martin’s Press.

4. Confess by Colleen Hoover – Auburn falls for an artist, Owen, who is keeping a secret and “the confession could be much more destructive than the actual sin…” I wonder what it is! Mar. 10, Atria Books.

6. The Grown Ups by Robin Antalek – This is a story about a group of teenage friends and how their friendships evolve over a decade. Jan. 27, William Morrow Paperbacks.

7. I Was Here by Gayle Forman – Forman is the queen of the “three word title” books, and her latest sounds quite angsty. Cody is reeling from her friend’s suicide and tries to piece together what happened through the clues left behind. Jan. 27, Viking Juvenile.

8.The Bookseller by Cynthia Swanson – 2015 seems like the year of “Sliding Doors” type books, and this one centers on Kitty, a 1962 unmarried bookseller. She dreams it’s 1963 and she’s married with three kids, and the dream life/reality lines begin to blur. Mar. 3, Harper.

9.Walking on Trampolines by Frances Whiting – This 2013 Australian book has been getting rave reviews, and now it’s getting a US release. Liane Moriarty says it’s “a tender exploration of friendship, families, and first love.” Sold! Feb. 3, Gallery Books.

10. The Last Time We Say Goodbye by Cynthia Hand – The Unearthly series is one of my favorites, and I can’t wait to read Hand’s first contemporary offering. Goodbye is about grief, love and letting go. Feb. 10, HarperTeen

What’s on your Winter TBR?

12 thoughts on “TTT: Books on My Winter TBR”