Here are the books that made their way to me over the last two weeks: 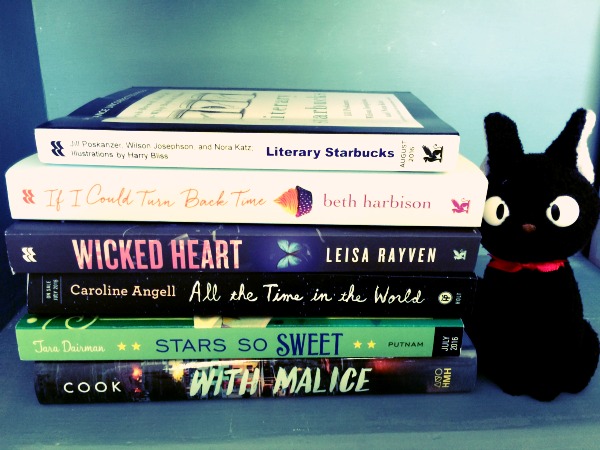 If I Could Turn Back Time by Beth Harbison from St. Martin’s Griffin –  Thirty-something Ramie hits her head and wakes up to find she’s eighteen again.

Wicked Heart by Leisa Rayven from St. Martin’s Griffin – The third book in the Starcrossed series is about a second-chance romance and set in the theater world.

All the Time in the World by Caroline Angell from FSB Assiciates – Charlotte puts her musical aspirations on hold and takes a nanny job. When tragedy strikes she takes on more responsibility to the boys in her care.

Stars So Sweet by Tara Dairman from Penguin Young Readers – The final book in the All Four Stars trilogy. This middle grade series is about Gladys Gatsby, a talented young restaurant critic.

With Malice by Eileen Cook from Big Honcho Media – A teenage girl wakes up in the hospital and can’t remember the last six weeks. Her best friend is dead and she is the prime suspect. The book came with some cool/chilling swag: a blood-spattered passport, evidence bag with dirt and car key, and fingerprinted FBI application card: 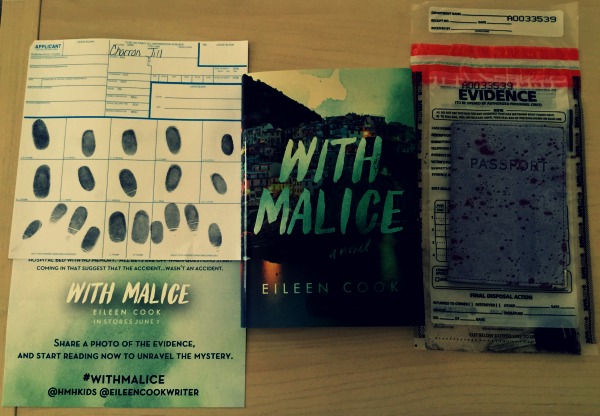 From my digital mailbox:

Into the Blue by Chanel Cleeton from Penguin Random House – The second book in the Wild Aces series is Thor and Becca’s story.

The Sun is Also a Star by Nicola Yoon from Delacorte – This is a love story between a girl who believes in science and facts and a boy who is more of a dreamer. There’s reasons why they can’t be together, but is it fate?

Read Me Like a Book by Liz Kessler from Candlewick – This coming-of-age is about Ashleigh coming to terms with her sexuality when she falls for her female teacher.

As I Descended by Robin Talley from HarperTeen – This YA horror novel is a Macbeth-inspired story with lesbian protagonists.