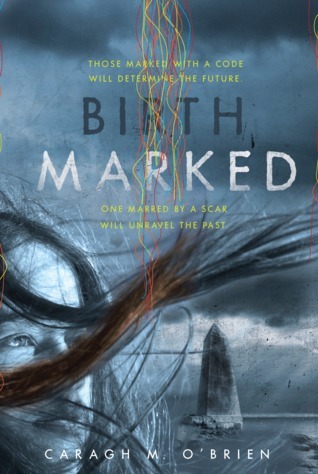 After climate change, on the north shore of Unlake Superior, a dystopian world is divided between those who live inside the wall, and those, like sixteen-year-old midwife Gaia Stone, who live outside. It’s Gaia’s job to “advance” a quota of infants from poverty into the walled Enclave, until the night one agonized mother objects, and Gaia’s parents are arrested.
Badly scarred since childhood, Gaia is a strong, resourceful loner who begins to question her society. As Gaia’s efforts to save her parents take her within the wall, she herself is arrested and imprisoned.
Fraught with difficult moral choices and rich with intricate layers of codes, Birthmarked explores a colorful, cruel, eerily familiar world where one girl can make all the difference, and a real hero makes her own moral code.

Birthmarked is a thrilling, action-packed dystopian by 2010 YA debut author Caragh O’Brien. I was in the mood to read a good, satisfying dystopian and Birthmarked really fit the bill. This book should satisfy those looking for something similar to the Hunger Games with its intrigue, mystery and suspense.

The dystopian world is set up very well, with a plausible concept, and the characters are compelling. The protagonist, midwife Gaia Stone, is brave and faces danger at every turn. Her parents kept some secrets from her to keep her safe. However, now that they have been captured Gaia must use her wits and code-solving skills to help save them. I have not read a book with codes before and thought that was an interesting element.

In addition to the code solving mystery and action, there is a little romance thrown into the mix. Gaia has great chemistry with Captain Leon Grey. Their relationship begins slowly and believably as they learn to trust each other. It is nice to see someone who can look past Gaia’s scars and believe in her.

The book is paced very well, and held my interest from beginning to end. The suspense ramps up toward the end and I couldn’t put the book down. There are some surprising twists along the way. The ending is sudden and intense, and sets up a whole new story for Gaia. I can’t wait to read what happens next. Those looking for a satisfying dystopian after finishing the Hunger Games should enjoy this series. Recommended also for fans of YA, dystopian, and sci-fi.

Birthmarked is the first book in a trilogy. The sequel, Prized, comes out in November 2011, which is entirely too far away.

I read this book as part of Presenting Lenore’s Dystopian February event. Check out her blog to find out more about the dystopian genre.