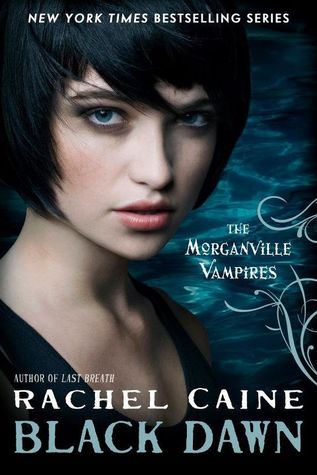 Here we are back for another installment of the YA Morganville Vampires series. This latest is book 12 of a planned 15 book series that centers on Claire Danvers, a teen who attends college in Morganville, a Texas town where vampires and humans co-exist openly. Once you move to Morganville and find out their secret, good luck getting out. Rachel Caine sure knows how to feed my addiction to this series by releasing new books twice a year. Life is never dull in Morganville and each book introduces a new challenge for the gang. I miss the series already, even though there are still three books left to go. The latest book is still keeping me guessing on what the end game of the series will be as circumstances in Morganville become more and more dire.

In the 12th Morganville Vampires book Black Dawn, the action picks up right after Last Breath took off. In fact, many of the same problems exist from that book so this is more of a continuation of that story. The icky mysterious draug creatures are still creating havoc in Morganville and have the vampires running scared. The draug hide out wherever the water is and feed off of any available vampire or human they can find.  They are fiendish creatures that can multiply in water – they made me recall the monsters of Gremlins or CHUD. They have a deadly leader too named Magnus but he doesn’t have a stripe like in Gremlins, in fact it’s almost impossible to tell him apart. Time is running out to destroy them before they take over completely. And with Founder Amelie infected, wannabe vampire leaders come out of the woodwork to try and take over. Claire, Shane, Michael and Eve have their work cut out for them once again.

The book again continues the recent trend of multiple POV, with Claire, Shane, Michael, Eve, and Oliver taking turns with the narration. And Shane in particular takes the reader on quite a journey with one of his chapters that had me holding my breath. I like following different characters around, and learning their secrets and thoughts about the craziness of Morganville. So I’m glad that the multiple POV has become a regular thing now.

This book is moody, dark and intense and has a bigger sense of hopelessness than other installments. With Morganville under attack basically it felt like anything could happen. The stress and tension of the crisis brings out some interesting reactions from the characters.

One thing that sets the vampires of Morganville apart is that they are so unpredictable, and for the most part very dangerous. And with Morganville in flux, the relationship between vampires and humans is extremely fragile. That relationship continues to intrigue me and I’m so curious to see where it’s all heading.

In Black Dawn important events occur that set the stage for the next book in the series. Emotions run high and glimpses inside the minds of different characters show how much they care about one another. This installment was a little uneven for me though, and I can’t quite put my finger on why.  I think I was ready to move on from the draug story, or maybe they just creep me out. Regardless, this book ends on such an ominous tone that has me concerned for the fate of my favorite characters. I look forward to visiting Morganville again soon to see how Claire and the gang are managing to survive in the next book, Bitter Blood.

Here is the Black Dawn book trailer that is sure to worry Shane fans: