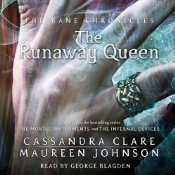 The Bane Chronicles is a 10-book novella spinoff series about fan-favorite warlock Magnus Bane from Cassandra Clare and guest co-authors Maureen Johnson and Sarah Rees Brennan. If you can’t get enough Magnus Bane, here’s your chance to catch up on his extensive backstory. The first installment from Rees Brennan, What Really Happened in Peru, debuted last month. I listened to this installment again via audiobook, and not only is there a new author but there’s a new narrator, actor George Blagden.

The Runaway Queen is co-authored by Maureen Johnson and takes place in Revolutionary France. Magnus agrees to rescue Marie Antoinette because Axel, the handsome count, asks him to. Meanwhile, Magnus is invited/demanded to attend a vampire soiree, a mysterious monkey turns up, and Magnus gives hot air balloon travel a whirl. 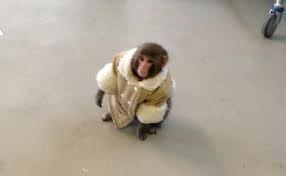 This installment is pretty entertaining, and in fact I listened to it twice. I kept getting distracted listening to Magnus talk about his lemon yellow gloves and wardrobe suggestions for his companion monkey, Ragnor, that I missed some key information the first time around! (Magnus wanted to dress the monkey like himself and I couldn’t help but think of Ikea monkey) There are some good tidbits packed in this 1-hour-ish audiobook and surprise name-drops from The Infernal Devices.

Magnus shows his usual flair in this book, and we get to learn more about how his mind works and see him think on his feet. I think the character is so fascinating and these glimpses into the past really give us a more well rounded picture of the warlock.

Maureen Johnson manages to get important historical and Shadowhunter world details right as well as bring humor to the story. There are several plot points juggled in this short story but I didn’t think it ever lost focus. This installment is an entertaining mix of adventure/danger/humor/romance and makes me eager to continue the series.

George Blagden narrates The Runaway Queen. Maybe there will be different narrators for each book? Jesse Williams narrated the first installment, and both actors do a good job with Mr. Bane.  You may know George Blagden from Les Miserables, and he’s also in a TV series called Vikings. I see on IMDB that Blagden is fluent in French, and that comes in handy in this audiobook with the Paris setting. I think his voice complements Bane’s personality and dry sense of humor. It’s a fine line not to make Bane sound too campy but Blagden gets it right. His voice for the French vampire assistant is quite humorous. Blagden does a great job overall.

The next book in the series is Vampires, Scones and Edmund Herondale, co-written by Sarah Rees Brennan, due out June 18. It takes place in Victorian London and features vampire Camille Belcourt and Shadowhunter Edmund Herondale. Sounds like a fun one!

Check out an interview with George Blagden discussing the audiobook: