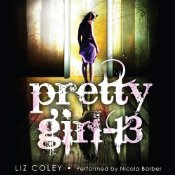 In Liz Coley’s alarming and fascinating psychological mystery, 16-year-old Angie Chapman must piece together the story of her kidnapping and abuse. Pretty Girl-13 is a disturbing – and ultimately empowering – pause-resister about accepting our whole selves, and the healing power of courage, hope, and love.

I knew going into this book that it was about an abduction of a young girl, so I expected an uncomfortable read. But there’s another element to the story that makes the events in Angie’s life mysterious and intense. Angie was abducted when she was thirteen while on a Girl Scout camping trip. Angie returns home three years later with no recollection of her abduction. Angie believes she’s still thirteen and just coming home from her camping trip. The police and her therapist help her come to grips with the trauma, as Angie’s alter personalities (alters) help shed light on her time in captivity.

Whoa, this book is intense. I think I’ve read only one other book about abduction, Elizabeth Scott’s Living Dead Girl, and that book rattled me so much I didn’t think I could read another. But the psychological thriller aspect in Liz Coley’s Pretty Girl-13 made me want to give it a try.

Angie grows a lot throughout the book, as she uncovers the details of the past. Obviously it’s an adjustment for her friends and family members as well, people who never thought they’d see her again. Angie built walls of protection around her to get through her ordeal, and slowly works at chipping them away. Each discovery brings another level of hurt and pain, and surprises as well.

It’s interesting being inside the head of a girl with D.I.D. (dissociative identity disorder.) All of the personalities in Angie are quite different to provide the armor she needed to survive. There are clues that savvy readers will put together to figure out some the mysteries, but the story is still quite moving.

Angie is a girl I rooted for. She goes through a lot, and her story of survival is hard to read but hopeful as well. I was so happy for her that she met people that had her back and treated her with kindness and respect after so many betrayals.  Her friend Kate that she reconnects with and the new boy she dates Abraim are two people that fill that role and support the healing process.

I stumbled on the Pretty Girl-13 audiobook when I was browsing MP3 titles to borrow from OverDrive. And, wow, there’s a lot more MP3 titles at the library then there used to be – yay! Nicola Barber reads the audiobook, and she has her work cut out for her with this one. She gives voice to all the alters in Angie, including characters of varying ages, gender, and maturity level. I think the audiobook made the story even more suspenseful, and hearing the characters voices made the story hit home even more. Well done, Nicola Barber!

Pretty Girl-13 is ambitious and emotional and seemingly well researched. It’s a tough subject, but bright notes throughout keep the story from being overly heavy. The book covers a lot of ground, and I’m not sure the recovery timeframe depicted for Angie is realistic, but I appreciate the story Liz Coley chose to tell. It brings up some interesting points about the role memories play in our lives and identity that provides food for thought.