Mailbox Monday is a weekly event where we share our latest book arrivals. Join in to share your book loot and discover some new book blogs. Mailbox Monday is on tour, and you can link up at Beauty in Ruins this week. 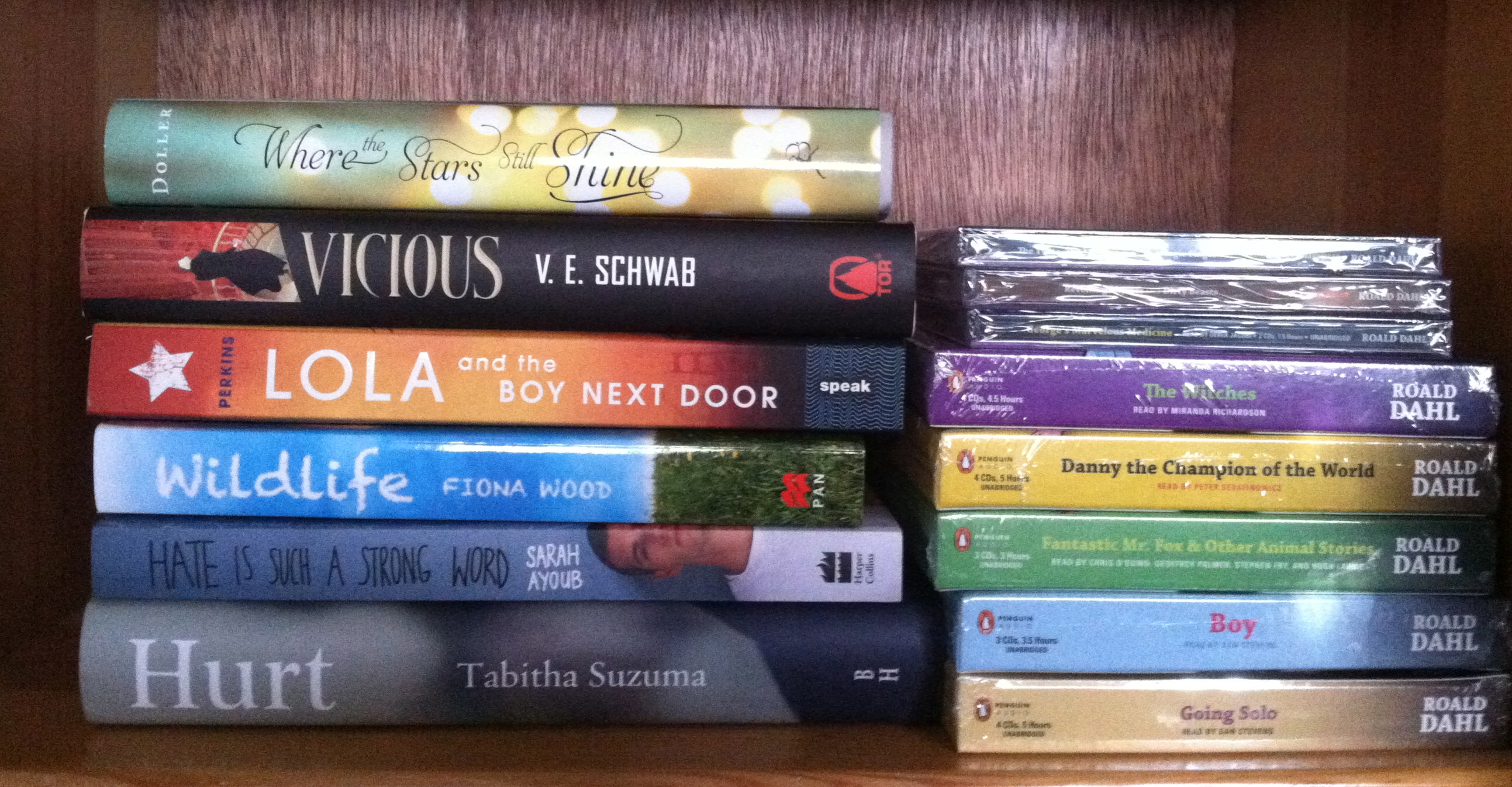 Where the Stars Still Shine by Trish Doller – Purchased hardcover. Loved it!

Vicious by V.E. Schwab– Purchased hardcover. Also not pictured are some book trading cards I received from the author for pre-ordering the book.

Lola and the Boy next Door by Stephanie Perkins  – Andrew was in Asheville, North Carolina last week and bought me a signed copy of Lola from Malaprop’s bookstore. Guess I’m collecting the new covers now!

Wildlife by Fiona Wood – The next three books I ordered from Fishpond since they are not available in the US. And Fishpond has free shipping – yay! I think this book can standalone, but there is an earlier companion book (Six Impossible Things) that I want to read first.

Hate is Such a Strong Word by Sarah Ayoub – This is about an Australian Lebanese hs senior misfit with a very strict father. Sophie meets a new boy at school who is also an outsider. There’s a culture clash that forces her to make big decisions.

Hurt by Tabitha Suzuma – I’m a big fan of the heart-wrenching Forbidden, and Suzuma’s latest book doesn’t have a US release date yet, but I managed to track it down. The book sounds intense, though the early reviews are a little iffy.

Rooftoppers by Katherine Rundell – Read by Nicola Barber. This middle grade book sounds so cute. It’s about a girl in search of her mother in Paris, who hides from the French authorities on rooftops along with other runaways. Sent for review from Simon & Schuster Audio.

Roald Dahl collection including: Revolting Rhymes and Dirty Beasts, The Twits, The Minpins, and The Magic Finger, George’s Marvelous Medicine, The Witches, Danny the Champion of the World, Fantastic Mr. Fox & Other Animal Stories, Boy Tales of Childhood, and Going Solo. Sent for review from Penguin Audio.

Sea of Shadows by Kelley Armstrong – First book in a new YA series. It’s been a while since I’ve read the Darkest Powers series so I’m interested to check out her new series.

Crash Into You by Katie McGarry– A Pushing the Limits companion book about Rachel, a wealthy prep-school girl who likes to go street racing where she meets Isaiah, the guy from the wrong side of the tracks.

Pawn by Aimee Carter – First book in a new YA dystopia series.

Afterparty by Ann Redisch Stampler – Set in Los Angeles, Afterparty sounds like a good girl gone bad story, and is about two girls in a dangerous friendship.

Yours to Keep by Serena Bell – This contemporary romance is about Ana, a woman who is living in the US with an expired visa. She’s a Spanish tutor for a handsome doctor’s son and envisions a forbidden future.

Tin Star by Cecil Castellucci – Ooh this looks good. It’s a YA sci-fi about a girl stranded on a space station with aliens. I love the tagline: Keep the aliens close. Keep the humans closer.

What exciting new books did you pick up this week? Have a good week!