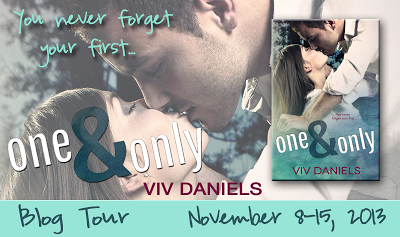 I’m so pleased to be the next stop on the One & Only blog tour! As you know I love New Adult, and I’m a fan of Viv Daniels’ alter ego Diana Peterfreund so this book is right up my alley. Did you know that author Diana Peterfreund’s Secret Society Girl was one of the first NA series, back in 2006 before NA was even a thing? So, she certainly has NA street cred, and reading One & Only makes me want to see what I’ve been missing with SSG.

Viv Daniels’ book is called One & Only, and it’s the first book in the Canton (College) series about a bioengineering student named Tess, a family secret, and a torrid romance. It’s the kind of New Adult book that I think readers have been hungry for, that shows more realistic challenges of college, like paying for classes and books, balancing social life/work/school and falling in love.  You can read my review here. Today I’ll share a little about the book, and Viv stops by with a guest post. Plus you can enter to win an awesome giveaway! 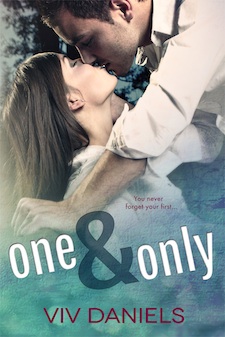 One night they can’t forget…

Tess McMann lives her life according to the secrets she’s sworn to keep: the father who won’t acknowledge her, the sister who doesn’t know she exists, and the mother who’s content playing mistress to a prominent businessman. When she meets the distractingly cute Dylan Kingsley at a prestigious summer program and falls in love, Tess allows herself to imagine a life beyond these secrets. But when summer ends, so does their relationship — Dylan heads off to Canton College while Tess enrolls at the state university.

One love they can’t ignore…

Two years later, a scholarship brings Tess to Canton and back into Dylan’s life. Their attraction is as strong as ever, but Dylan has a girlfriend…who also happens to be Tess’s legitimate half-sister. Tess refuses to follow in her mother’s footsteps, which leaves her only one choice: break the rules she’s always followed, or allow Dylan to slip away for a second time.

…And only one chance to get things right

And now I’m thrilled to welcome author Viv Daniels with a guest post about her heroine Tess:

Guest Post by Viv Daniels: Crazy Things Tess Could Do For Money

In my new novel, ONE & ONLY, Tess McMann is a poor scholarship student looking for a way to afford her expensive private school books, lab fees, and other hidden costs not covered by her academic scholarship. To cut corners, she lives in her mother’s apartment. Every night she isn’t working on the lab symposium that might win her an extra $5000, she’s waiting tables at a popular campus hotspot, even though it means occasionally being ogled, groped, and even propositioned by drunk frat boys.

But maybe she hasn’t exhausted all her avenues of money making. Here are a few she hasn’t yet tried—for good reason!

1) Lab Rat: Sure, I may have answered the occasional questionnaire or sat through the odd psych interview for cash, and once I even made $40 by spending an afternoon in an MRI machine, fighting off sleep and letting the good folks in the neuroscience department map my brain, but everyone knows you only make real money as a lab rat if there’s risk involved. Tess should consider a pharmaceutical or vaccine study. I knew a guy who made a thousand bucks by doing a semester-long sleep-deprivation research study. His grades went to hell, though.

2) Donate Her Eggs: In college, not a week went by but I didn’t see a pair of desperate parents looking for egg donations advertising in the back of my school newspaper. Usually the fees were in the neighborhood of $20,000-$40,000 dollars if you were a white, blonde-haired, blue-eyed college student with a 1400+ SAT score (I think that would be a 2200+ in today’s parlance). (I had all those qualifications, but I never donated an egg.) Now, there are a few problems with this scenario. The first and most obvious one is that Tess has brown hair and hazel eyes, but she’s super pretty, healthy, and smart, and could probably still commandeer at least 10k. The second problem, of course, is that egg donation is an extremely difficult, time-consuming, and risky venture (which is why ladies who donate eggs make a lot more than fellows who donate sperm). The third problem is that she can’t really share her medical history with potential egg buyers, given that half of her parentage is a huge secret (though if she could, she could share that her father is blonde, so they might still have a chance for that blonde baby they all apparently want, a weird facet of the egg-donation industry which is a blog post unto itself).

3) Cheating for Cash: Now, there’s the obvious essays-for-cash ventures, where students buy finished term papers. But English, history, and other subjects that have term papers aren’t exactly our girls’ strong suit. I knew a guy who used fake IDs to take exams in other people’s names, which she could probably do in science, math, or stats classes. He made a fortune. He also got kicked out of school. Tess doesn’t strike me as a girl who likes to live that far on the wild side. Plus, she’s got a pretty strong moral compass, and she’s probably disgusted I even mentioned the idea.

I guess she and Dylan better win that competition, huh?

Thanks, Viv! And yeah, given the choices, I’d agree that winning the competition is Tess’ best bet.

The Giveaway has ended!

Congrats to Jill who who won a swag pack of goodies including: a One & Only bookmark, an assortment of gifts and books from Viv and other new adult authors, and a One & Only charm.

Hot Reads in the Summertime: Top Ten Beach reads
Deals for your Kindle (1)
Need for November: Most Wanted Books
Mailbox Monday #61
The Wild Ones by M. Leighton Book Review

5 thoughts on “Blog Tour: One & Only by Viv Daniels Guest Post and Giveaway”