The Movie Date is a weekly feature where we discuss movies that may appeal to YA readers. Andrew is The Reading Date’s resident movie critic and this week he discusses Kisses, a 2008 Irish film written and directed by Lance Daly. 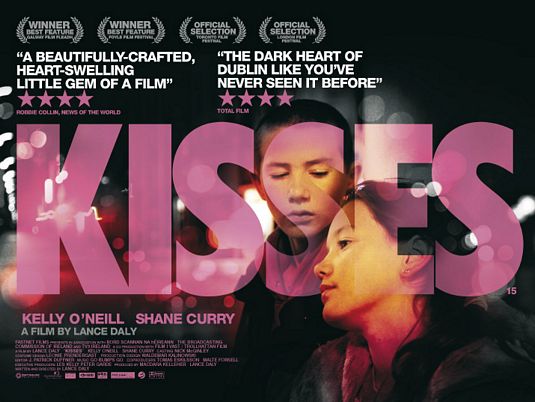 An Irish boy and girl, both 11, escape their abusive homes to spend a night in beautiful but dangerous Dublin, where they search for the boy’s older brother.

The visuals and plotting of this charming Christmastime fairy tale are so light that it might just float away were it not for the gritty, real-world issues anchoring it. Though Dylan and Kylie are neighbors of the same age on the outskirts of Dublin, they’ve never managed to strike up a friendship. Dylan spends most of his time hiding in a storage cupboard from his drunken, unemployed, and hot-tempered father; next door, Kylie’s mom and sister belittle her endlessly and her creepy uncle Maurice seems far too friendly. When Dylan tries to save his mum from another beating by “Da,” he’s literally forced to run for his life; Kylie helps him escape and soon the two of them are off to… well, anywhere but home.

They hop aboard a barge heading up a canal, hoping to find Dylan’s brother Barry in Dublin. Though the barge pilot discourages them from riding, he proves a fine traveling companion, playing games and singing songs from the boy’s namesake, Bob Dylan. They get a further education in the singer’s catalog when they help a busker earn tips on the glittering streets of the capital. Kylie’s stolen a hefty bankroll from her sister and the duo quickly spends it all on candy and warm coats. They also buy themselves Heelys, those sneakers that have a wheel embedded in the sole, which they use to skate all over town. The twinkling lights on their new kicks blend into sparkling and festive Dublin, aglow with hope and possibility on this magical Christmastime night.

The gleeful carnival spirit begins to fade a bit as their hunt for Barry takes them from squatters’ flats to dingy flops to homeless camps near the river. With hunger growing and money gone, they begin to realize that the big city may not be such a safe place for little ones. To help them survive, they have only each other. Which may just be enough.

In runaway stories like this, it’s frequently the male who’s leading the charge. In this case it’s the very smart and tough female; Kylie is brave and endlessly inventive, with courage enough for both of them. She’s played brilliantly by nonprofessional actress Kelly O’Neill, who wisely seems to have abandoned the acting business since this 2008 film in favor of a normal childhood. (The actress reminded me of Maisie Williams, who plays Arya Stark on Game of Thrones.) Shane Curry plays Dylan as fairly brooding, which is appropriate; given that his brother may have succumbed to exposure or perhaps his father’s violent hand, the boy’s got a lot on his mind.

Though outwardly calm and quite beautiful, the film builds up considerable tension: we realize the kids can’t survive in the city and we can’t imagine them going home to suffer more cruelty, either. (We learn that Kylie has endured abuse as well.) How will they resolve this? The finale is subtle yet deeply moving; it’s clear these two survivors have much to face on the road ahead, but neither will have to face it alone.

Tough and frequently heartstopping, this Christmas-themed film is filled with hope, the one thing desperate Dylan and Kylie need more than anything.

Kisses is Not Rated and runs 80 min. It’s available to rent from Netflix.

3 thoughts on “The Movie Date: Kisses”