Mailbox Monday is a weekly event where we share our latest book arrivals. Join in to share your book loot and discover some new book blogs. Mailbox Monday is on tour, and you can link up at Rose City Reader this month. Also, the votes are in and the Mailbox Monday blog will be the primary host for the meme in 2014!

How’s everyone doing with their holiday shopping? I still have lots to do! 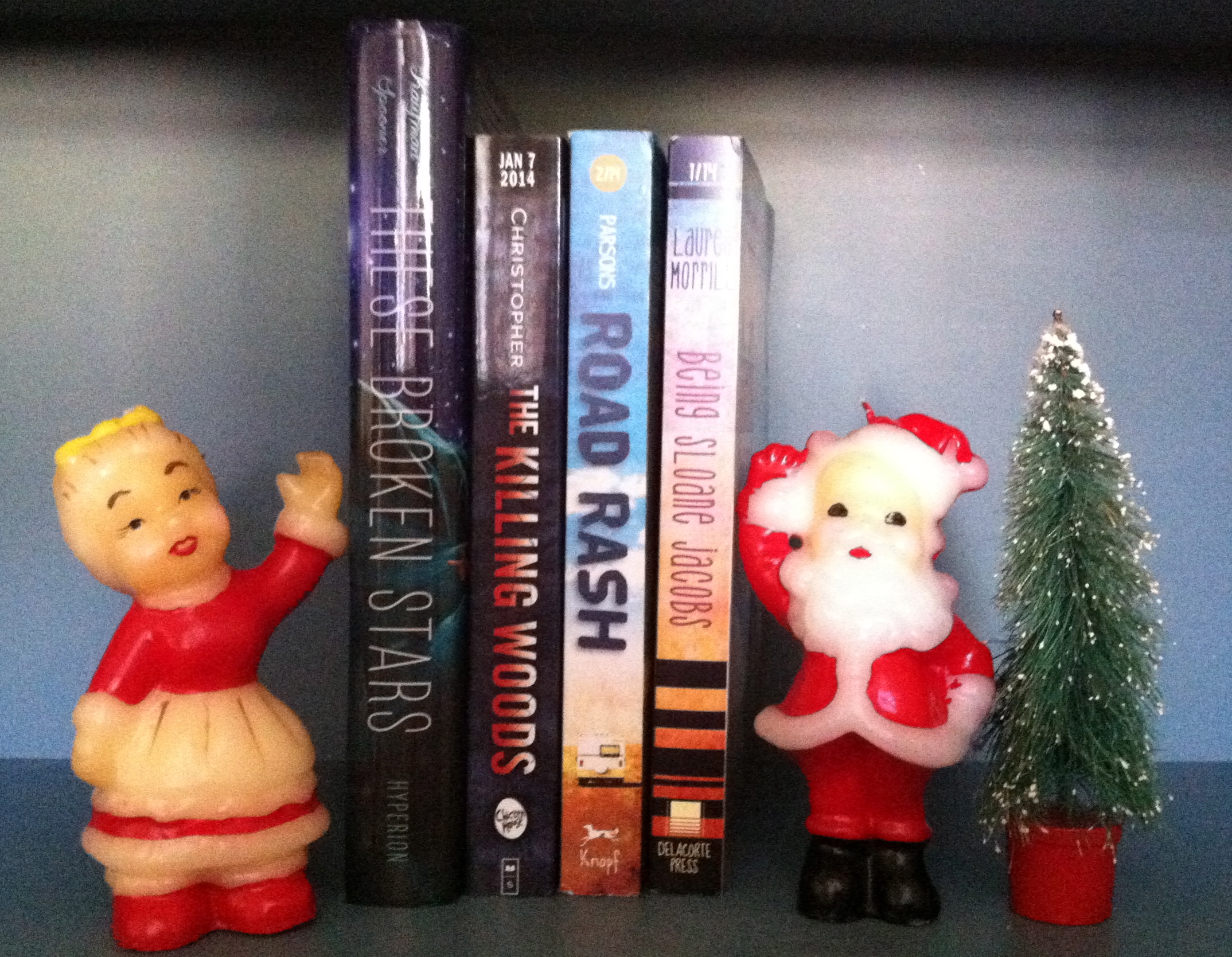 In my mailbox I received:

These Broken Stars by Amie Kaufman and Meagan Spooner – Purchased the hardcover after hearing so many good things about the book. I wish I had the audiobook though – maybe it will go on sale!

The Killing Woods by Lucy Christopher – For review from Big Honcho Media for an upcoming blog tour. This is a psychological thriller by the author of Stolen.

Road Rash by Mark Parsons – From Random House/ Random Buzzers store. This is about a teen drummer who goes on tour with a rock band.

Being Sloane Jacobs by Lauren Morrill – From Random House/ Random Buzzers store. This is a contemporary romance about two Sloane Jacobs, with a Parent Trap-style switcheroo.

The Other Way Around by Sashi Kaufman – This was a recent WoW pick, and it’s about a kid trying to find himself on a Thanksgiving road trip.

Broken Hearts, Fences and Other Things to Mend by Katie Finn –  The first book in a new summer series about a girl with a secret identity.

Lost Lake by Sarah Addison Allen – A magical story about a widow and her daughter spending the summer at Lost Lake.

The Queen of the Tearling by Erika Johansen – A YA high fantasy/ Game of Thrones type book. Look at that epic cover! (actually there’s another cover floating around so I’m not sure what the final version is) Emma Watson is attached to star in the film so it sounds like this book will be a big deal.

Believe by Erin McCarthy – The latest book in the True Believers series, about Robin and Phoenix.

Salt by Danielle Ellison – The first in a new paranormal series about a witch who has lost her magic.

#scandal by Sarah Ockler – This was another recent WoW pick, and it’s about a gamer girl who gets caught in a compromising position.

Don’t Call Me Baby by Gwendolyn Heasley – This about a girl whose life has been documented on her mom’s blog since birth- now she’s creating her own blog to show another side of her.

Have a good week and happy reading!

Also Known As by Robin Benway Book Review
The Movie Date: If I Stay
Mailbox Monday (92)
Top Ten Most Anticipated 2013 Reads
The Perks of Being a Wallflower By Stephen Chbosky Review and Playlist