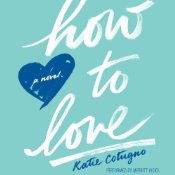 Book: How to Love by Katie Cotugno, Harper Audio, October 2013

How to Love is a mature YA book about a girl who falls for (the wrong?) guy. Reena has always been in love with Sawyer, the elusive son of family friends. When Sawyer and Reena finally get together they have a torrid love affair that ends with Sawyer leaving town, and Reena pregnant at sixteen. College and travel plans have gone out the window for Reena. Now she has a toddler to raise and the guy who got away is back in the picture.

I wanted to love How to Love a little more than I did. I liked that the story is mature and borders on New Adult territory, and the teen raising a baby story was interesting. But, since a lot of the story concerns Reena and Sawyer’s relationship, and I wasn’t a fan, the emotional connection wasn’t always there for me.

Reena is a smart girl with a good head on her shoulders. She was going to graduate high school a year early and travel before the pregnancy changed everything. But, she loves her daughter Hannah and rises to the occasion. She has mainly moved on with a new boyfriend, and a new routine with Hannah. But Sawyer’s return changes everything.

Sawyer just seemed like a jerk to me and I never really warmed to him. I know the heart wants what the heart wants, so whether I like it or not, it’s realistic that Reena has this connection to him. And of course they have a baby that bonds them. But I couldn’t find myself rooting for the pairing for most of the book. Reena is strong with so much of her life, but Sawyer is her kryptonite.

I liked Reena’s support system, especially her friend Shelby and her stepmother Soledad. They help her through some pretty serious friends/family tragedy. It’s also realistic that Reena’s dad has a hard time adjusting to Reena’s change of life plans.

I appreciate what Katie Cotugno did with presenting characters that are not cookie-cutter. There are shades of gray in everyone, and the love interest especially is not the idealized male we usually see in YA. It’s realistic and messy and those outside of the romance can’t always understand it.

The chapters alternate with “Before” and “After” the pregnancy to fill in the blanks of Reena and Sawyer’s relationship. The style makes sense for this story and I think Cotugno managed the timelines well. It’s interesting to see the contrast of the then and now and the device makes you want to keep listening to unravel the story.

I listened to the audiobook, performed by Merritt Hicks. Hicks is perfect for the voice of Reena. She sounds mature and calm beyond her years like the character. Hicks reads with a measured pace that matches the tone of the book. She uses different voices and accents for the characters so it’s easy to tell them apart. Her voice for Sawyer makes him sound like the guy you’re not sure you should root for, so that’s appropriate. I’d listen to this narrator again.

My feelings are a little wishy washy about How to Love since I didn’t buy into the romance. But at the same time I can appreciate Cotugno’s unique voice. There are plenty of 5-star ratings of this book so take my opinion with a grain of salt.

6 thoughts on “How to Love by Katie Cotugno Audiobook Review”