Subway Love has a great hook that really grabbed me. It’s about two teens that have a chance meeting on a New York subway, but are having trouble reconnecting. It turns out that this particular graffiti-tagged subway car is the only way for these ill-fated lovers to meet. That’s because Laura is living in 1973, while Jonas is living in the present day. This subway car is their DeLorean/ Tardis /Midnight in Paris time travel device in this innovative spin on Romeo & Juliet.

I didn’t notice at first but you can see the characters riding the train on the cover. They look kind of ghostly, don’t they? 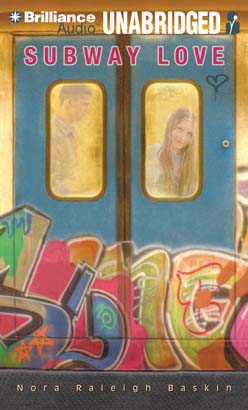 What if destiny leads you to your soul mate, but the laws of time conspire to keep you apart?

If her parents had never divorced, Laura wouldn’t have to live in the shadow of Bruce, her mom’s unpredictable boyfriend. Her mom wouldn’t say things like “Be groovy,” and Laura wouldn’t panic every weekend on the way to Dad’s Manhattan apartment. But when Laura spots a boy on a facing platform, lifting a camera to his face, looking right at her, Laura feels anything but afraid, and she can’t forget him. Jonas, meanwhile, thinks nonstop about the pretty hippie girl he glimpsed on the platform — trying to comprehend how she vanished, but mostly wondering whether he will see her again in a city of millions — and whether if he searches, he would have any chance of finding her. In a lyrical meditation on love, Nora Raleigh Baskin explores the soul’s ability to connect, and heal, outside the bounds of time and reason.

In Subway Love we follow Laura and Jonas, two teens dealing with some pretty serious family drama. They can escape from their lives when they meet on the subway car. But there will be no coffee dates to Starbucks for these two, and in fact Laura doesn’t even know what that is since she’s living in the early 1970s. Jonas suggests they exchange cell phone numbers, or add each other on Facebook, only to be met by blank stares from Laura. This relationship has its challenges for sure! Their subway “guide” is Spike, a graffiti artist who wants to put his artistic stamp on the world.

I lived in New York in the early 90s and by then the graffiti-covered trains were a thing of the past, though there were street art murals. Setting Subway Love in 1973 serves the purpose of sharing this lost art, and shining a spotlight on one such graffiti artist.

The alternate time frame also tells us a little about hippie culture (Jonas thinks Laura looks like a hippie though doesn’t automatically think she’s from another time) and Jonas’s tech-obsessed life. This time device shows the difference in technology for Laura and Jonas- the only sure way they know they can communicate in on that subway. Laura takes the train a lot from Woodstock to New York City to visit her dad, and Jonas is obsessed with reconnecting with her on the train.  Through alternating pov we see Laura’s challenging home life- her mother’s boyfriend is abusive. And Jonas’ father left his mother for another woman.

The how’s and why’s of the subway portal and time travel are unclear, but I was along for the ride anyway so to speak. The subway love story illustrates the sense of doom hovering over the pair- Laura is younger but is quick to see the challenges in this situation.

I listened to the audiobook, performed by Kate Rudd (TFIOS narrator) and Todd Haberkorn (Between the Lines series narrator.) The characters are young, Laura is 14, and Jonas is 16, and I think the narrators did a good job of capturing that youthful tone. It was helpful to have two narrators to differentiate each timeline. There’s a lot going on in this book, and hearing two narrators helped keep track of it all. This is a quick listen at just 5 hours and the narrators were successful in selling me on this story.

And check out the book trailer:

The giveaway has ended – congrats to Debbie!