The Movie Date is a weekly feature where we discuss movies that may appeal to YA readers. Andrew is The Reading Date’s resident movie critic and this week he discusses the Rom-Com spoof They Came Together, directed by David Wain, written by Michael Showalter and David Wain. 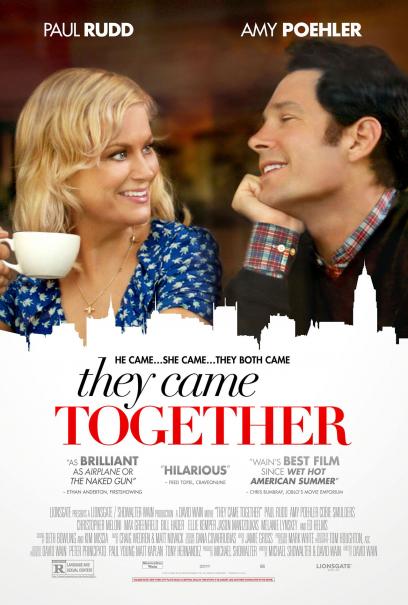 “You like fiction books? I’ve never met anyone else who likes fiction! That is too funny!” (Molly runs into Joel at Strand Books, NYC)

They Came Together is a rom-com. Or should I say it’s THE rom-com, the one that packs so many beloved love-comedy clichés into one film that you never need to watch any other. It’s also a spoof, which means it’s poking fun at all these overworked memes at the same time it’s indulging in them—having your cake and laughing at it too. And it also stars Amy Poehler and Paul Rudd, who I’d watch in anything, separately or together. So this is a big, funny, smart, trainwreck of wonderful.

The framing device is a long dinner conversation as Molly (Poehler) and Joel (Rudd) tell two friends (Bill Hader, Ellie Kemper) how they got together, describing their courtship as “kind of a corny, romantic comedy kind of story.” Boy, is it. She works at a tiny artisanal candy shop (Upper Sweet Side) and he belongs to the megacorporation (CSR, Candy Systems Research) threatening to put her out of business. They hate each other when they meet as strangers and are annoyed to find they’ve been blind-dated. He has a sexy, promiscuous, yet jealous ex; she’s being pursued by her unsophisticated accountant. Yet they both like fiction, they both like coffee (straight from the pot, no lattes or ventis)—with so much in common, what could go wrong?

If you’re a rom-com fan, you’re probably groaning with familiarity at every plot twist above; such groans come thick and fast in They Came Together. But what’s odd is that you grow fond of the clichéd film-within-a-film that’s being spoofed. That is, if this was a simple Rudd-Poehler rom-com, it would still be pretty delightful. As Bilge Ebiri notes on Vulture  “you find yourself sort of rooting for [Molly and Joel] to get together, even amid the gathering silliness.” Most good films have you inside the story, identifying with the characters, and most spoofs have you standing on the outside making fun of them. This charming, witty, and seldom raunchy film has you both inside and outside at the same time (a curious and delightful feeling), laughing at your own movie addictions as much as anything else.

3 thoughts on “The Movie Date: They Came Together”