The Movie Date is a weekly feature where we discuss movies that may appeal to the YA audience. Andrew is The Reading Date’s resident movie critic and this week he discusses GONE GIRL, directed by David Fincher, and based on the book by Gillian Flynn. 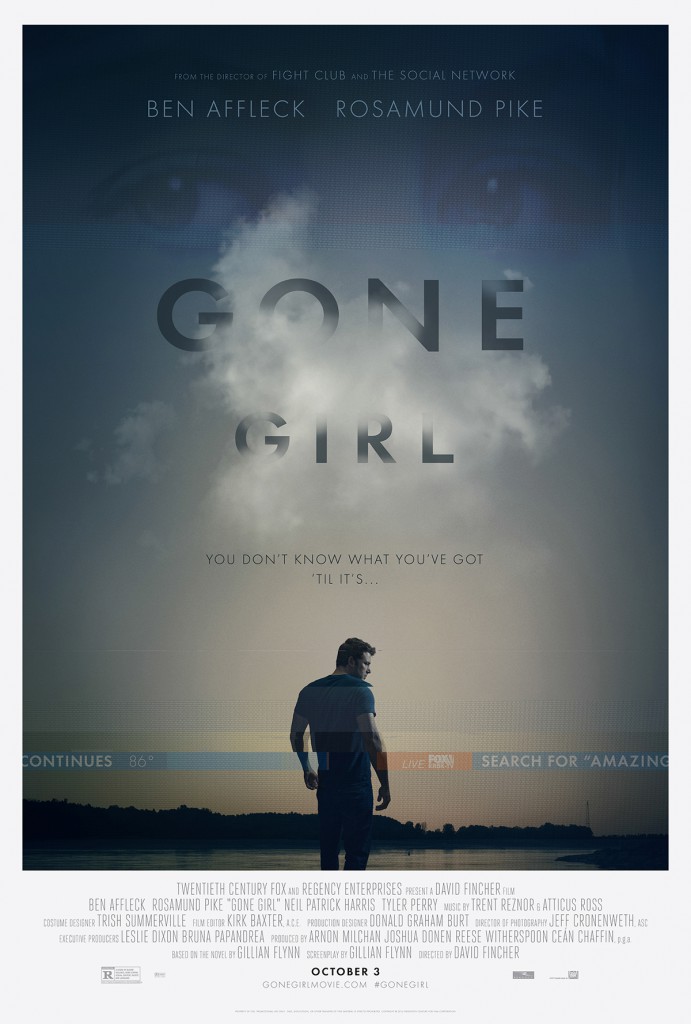 (Spoiler-free review, though most or all of you know the book by heart already!)

I’ve been curious about this book since Lucy told me about it two summers ago, and since I can’t be bothered to crack open a novel these days I’ve been eagerly awaiting the film version. Plus I didn’t want this very twisty tale to get spoiled for me, so I wanted to see it as early as possible. Back then Lucy described the plot as follows: “A man’s wife goes missing, the police gradually suspect that he may have killed her… and then everything goes crazy.”

Which is, of course, exactly what happens here. On the day of his fifth anniversary, Nick Dunne (Ben Affleck, a fan of movies with “gone” in the title) visits his sister for an eye-opener cocktail, then returns home to discover signs of a struggle… and not a sign of perfect wife Amy (Bond girl Rosamund Pike). As Nick relates the tale of his marriage to an increasingly suspicious Detective Boney (Kim Dickens), we hear from Amy via flashbacks. From a diary she kept, she narrates her courtship with Nick as they transition from New York City to rural Missouri. These playful, sexy vignettes were so charming I almost wished this wasn’t a thriller; I’d gladly watch a romcom starring this button-cute couple. But the truth will out, and we learn how money woes and family illness brought out Nick and Amy’s darker sides.

Back in the present, a huge groundswell of small-town support for their missing lady turns nasty for Nick; forensic evidence (eg a lot of carelessly mopped blood) suggests that he may have slain his poor, frightened wife; cable news hops on the case and publicly castigates him. Then suddenly we find out, in fascinating detail, what happened that morning…

The twist is a doozy and had the audience gasping. But while most shockers save their twist for last, this one comes pretty early in the story, maybe 45 minutes to an hour in. You think: they’re laying their cards on the table now—what are we gonna do for the next hour or two? And I hope it’s not spoiling things to say that I found the balance of the film… delicious. In fact, the latter 2/3 of Gone Girl was so strong and fascinating they could have started right after the twist. But why miss all that fun? (My point is, it’s not just a “twist” movie, not at all.)

What we wind up with is a film that’s half a crime thriller and half a dark relationship drama: Nick and Amy’s love was not a healthy one at all. As Nick hires a powerful New York attorney (Tyler Perry) and meets Amy’s obsessive high-school flame (Neil Patrick Harris), he starts to wonder exactly what kind of woman he married in the first place. And so do we. Busy yet unknown Rosamund Pike excels as the shadowy Amy, bringing out both her sweet docile nature and her smoldering resentment, while Affleck shines as the candid yet mysterious Nick. Director David Fincher brings The Social Network’s chatty, sardonic, high-energy buzz to the proceedings. And Gillian Flynn adapts her own novel into a brisk, stellar screenplay.

There was some conversation about whether or not the film was going to retain the book’s controversial ending, and apparently it has. I can’t imagine a better place for the tale to wind up: its calm resolution is at the same time as terrifying as hell.

Gone Girl is certified fresh at 86% and should do great this weekend. How do you think it compares to the book?