I’m so pleased to take part in the NONE OF THE ABOVE blog tour! I.W. Gregorio’s debut is an enthralling and informative book about an intersex teen. Today’s teens are very interested and savvy about gender diversity concerns, though teachers and YA books haven’t quite caught up to them yet. (I’ve learned a lot about gender terminology from my own teenager) So, I was happy to see that this book exists and think it will be a great resource for schools, teens, and adults to learn more about intersex conditions, and hopefully more books will follow. (Read more about intersex conditions and FAQ’s here)

None of the Above is about Kristin- a homecoming queen and star athlete. Kristin finds out she’s intersex during a gynecological exam after a difficult sexual experience. Kristin reaches out to friends for support but the word gets out and there is some bullying and name-calling. The author’s medical background lends authenticity the book and Kristin’s story is handled with sensitivity and respect.

In this blog tour, author I.W. Gregorio writes a series of blog posts relating to the topic of the book, and also debunks some common myths about intersex conditions. Today the author stops by to share some LGBTQI book recs for readers to consider for further reading. (I’ve read about half the books on this list and they are fantastic)

Five inspiring LGBTQI books that can, and will, change lives

As the mother of a five-year-old and a one-year-old, I’ve been thinking a lot about when children form their biases. I grew up in a fairly conservative part of the country, and after a long stint in various liberal bastions, I find myself living once again in an area where most of my neighbors lean toward the right.

Just the other day, my daughter asked me, “Can boys wear dresses too?” and my husband and I both said “Yes.” But I wondered if she asked that question because of something she overheard at school that suggested otherwise. So of course I thought of some books that I will have on my shelves as she grows up, to help her understand that there are many ways to love other people – and to love yourself.

1.     Jacob’s New Dress by Sarah and Ian Hoffman, illustrated by Chris Case – This was the first book that came to mind when Olivia asked the question. I’d actually read it to her a last year, and she immediately asked me to read it to her again. It’s a lovely, warmly written and illustrated book about a boy who just happens to like wearing dresses – and the parents who choose to accept him for who he is.

2.     Red by Michael Hall – Okay, so this book doesn’t look like a LGBTQI book on the surface, but the subtext is clear: if a kid doesn’t think his or her outside fits how they are on the inside, they shouldn’t be afraid to express their true self.

3.     Five, Six, Seven, Nate! by Tim Federle – In this irresistable sequel to the universally adored Better Nate than Ever, Nate Foster’s an understudy for E.T.: The Musical and the subtle LGBT undercurrent of the first book gets punched up to a middle-grade romance. It’s so refreshing to have a funny and hopeful book about a 13-year-old kid coming out.

4.     The Miseducation of Cameron Post by emily danforth – Whip smart, funny and heartrendingly vulnerable, Cameron Post is an irresistible protagonist and just so perfectly rendered. What I found most striking about the book, though, is its nuanced portrayal of a conversion therapy school, and how danforth captures the breathless anxiety of young love.

5.     Lies We Tell Ourselves by Robin Talley – I value this book for many reasons, but most particularly because it has intersectional diversity (one of its protagonists is African-American and lesbian). Talley’s portrayal of the brave pioneers of school integation is nail-bitingly visceral, and the way she handles the internal battles that her main characters face surrounding their sexuality is perfectly stunning.

I. W. Gregorio is a practicing surgeon by day, masked avenging YA writer by night. After getting her MD, she did her residency at Stanford, where she met the intersex patient who inspired her debut novel, None of the Above (Balzer + Bray / HarperCollins). She is a founding member of We Need Diverse Books™ and serves as its VP of Development. A recovering ice hockey player, she lives in Pennsylvania with her husband and two children. Visit her on her website, Twitter, Tumblr, Facebook, and GoodReads for her latest news.

None of the Above will be available in stores and online on April 7, 2015.

Did you know? The author is helping us debunk one myth about Intersex at each tour stop. Here is Myth #3:

To celebrate the release of None of the Above, we’re giving away a mystery box for 4 hot upcoming Harper Collins ARCs! They have some awesome books coming out this year, and the winner will receive some fantastic books. US/Canada only, complete rules are on the entry form. 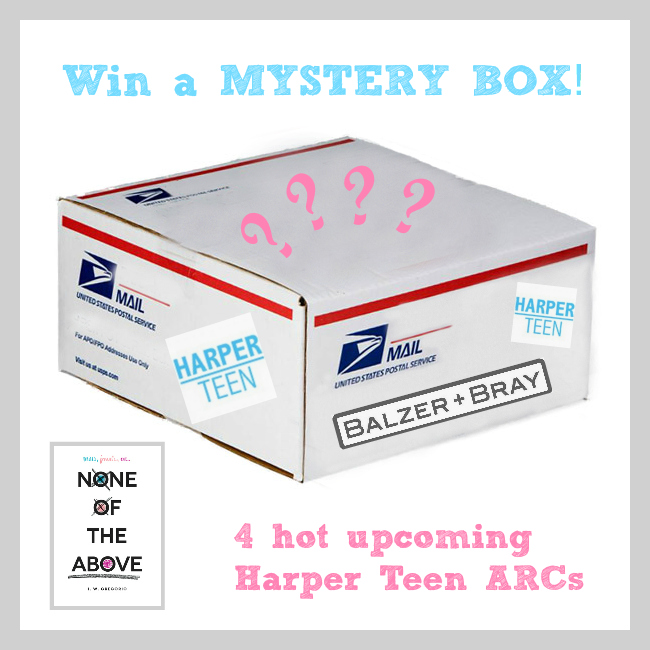 Follow along with the NONE OF THE ABOVE Blog Tour:

In My Mailbox (42)
Entangled by Cat Clarke
Awakened (House of Night #8) By P.C. Cast, Kristin Cast
In My Mailbox (57)
Enders by Lissa Price Audiobook Review

21 thoughts on “None of the Above by I.W. Gregorio Guest Post and Giveaway”