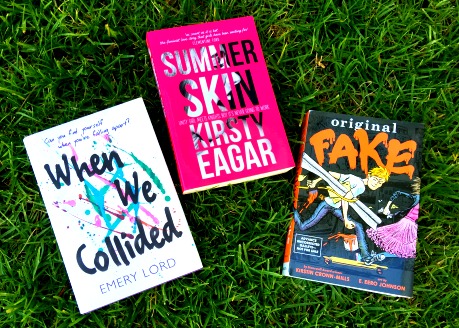 Happy May everyone! Here are the books that have made their way to me in April:

When We Collided by Emery Lord – Vivi and Jonah have a summer romance and Vivi is dealing with bipolar disorder while Jonah is grieving his father’s death.

Original Fake by Kristin Cronin-Mills, illustrated by E. Eero Johnson – This is a “Banksy-inspired illustrated novel” about a pizza-selling introvert who gets into street art. Thanks G.P. Putnam’s Sons! 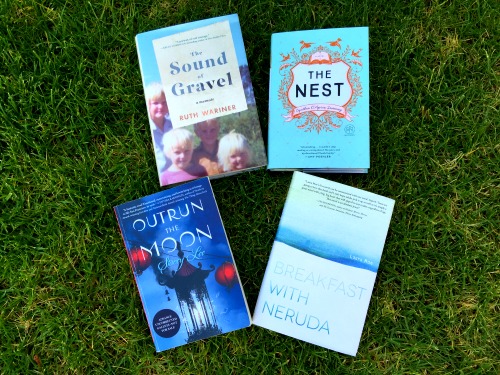 The Sound of Gravel by Ruth Wariner – This is a true story about a girl growing up in a polygamist cult in Mexico. Picked it up along with The Nest from Book of the Month club.

The Nest by Cynthia d’Aprix Sweeney – Four adult siblings meet to discuss the fate of their shared inheritance.

Outrun the Moon by Stacey Lee – I won this from Rich in Color– thanks! This historical YA is about the aftermath of the big 1906 San Francisco earthquake.

Breakfast with Neruda by Laura Moe – Michael’s living in his car and was recently expelled due to trying to blow up his friend’s car. (revenge for him stealing Michael’s girlfriend) During mandatory community service Michael meets Shelly- can he let her into his heart? Thanks Merit Press!

And, here are a few highlights from my digital mailbox:

The Inside of Out by Jenn Marie Thorne – Thorne’s sophomore novel is about love and friendship and wanting to be an LGBTQ ally but going about it the wrong way.

Phantom Limbs by Paula Garner -This debut takes of friendship, grief and love. It’s getting some early rave reviews!

Hamilton: The Revolution by Lin-Manuel Miranda and Jeremy McCarter – Audiobook narrated by the authors and Mariska Hargitay. Do you have Hamilton fever or are you over it? Listening to this will be the closest I get to see this show, unless I score tix to the National tour!

How to Keep Rolling After a Fall by Karole Cozzo – Nikki was involved in a tragic cyberbullying incident and Pax, a wheelchair rugby player shows her that everyone deserves a second chance.

Results May Vary by Bethany Chase – Caroline is reeling after discovering her husband’s affair… with another man. Now she’s trying to rebuild her life, mending her sibling relationship and opening her heart to new beginnings.

When We Was Fierce by E.E. Charlton-Trujillo – This coming-of-age verse novel is a story of survival in the face of street violence.

The Light Fantastic by Sarah Combs – This book is about teenagers on the edge, and includes seven interwoven stories revolving around a cross-country ploy led by an Internet savant known as the Mastermind.