This year was my fourth Comic-Con and my husband, daughter and I have started to make it an annual tradition / mini San Diego vacation. We each have our own wish lists of panels and events each year. This year my husband wanted to find some comics from his childhood years at the exhibit hall and attend the big movie panels in Hall H. My daughter and I wanted to check out the book panels and meet some favorite authors at signings. For the most part overall we managed to see most of the panels we wanted and had one of our better Comic-Con experiences. I think we were successful this year by planning our schedule in advance, waking up early to score a spot in lines, and focusing in on one must-see a day and scheduling the day around that goal. It helped that we took a more laid back approach and didn’t stress too much about not getting in to certain panels. It made for a more relaxed and fulfilling Comic-Con experience overall. I never take many pictures at Comic-Con and prefer to just enjoy the experience, though I do wish I had pictures once I get home. Luckily there are tons of pictures to be found online of the memorable events and costumes.

After getting settled into our hotel and eating an early dinner, we headed to the convention center. On our way in we saw hundreds of fans camped out on the lawn for Thursday’s Breaking Dawn panel, many of whom showed up on Tuesday. Gotta admire their commitment! We lined up to pick up our badges at the convention center. The line moved very quickly and we soon had our badges and swag bag in hand. Then we encountered our first line to wait for the exhibit hall to open. Once inside, my daughter and I made the rounds of several booths, looked at the exhibits and did some people watching. My husband headed up to Ballroom 20 where they were screening the Fall pilots of Alcatraz, Person of Interest, The Secret Circle and Supernatural: The Anime Series. Back on the exhibit floor, my daughter and I purchased Supernaturally and Wolfsbane so we could get those signed later in the week. The crowds weren’t too bad in the exhibit hall, but after awhile we were getting tired and headed up to Ballroom 20 to check out The Secret Circle. We came in late to the screening but I’m intrigued from what I saw to check it out in the Fall. It is a new show based on another L.J. Smith book series, this time about witches, and put together by the folks behind The Vampire Diaries. I think this show will appeal to fans of The Vampire Diaries, Pretty Little Liars, or Gossip Girl. The show Alcatraz also got some good buzz and I look forward to checking it out when it airs. After the screening we headed back to the hotel to get some rest. Thursday would be an early morning!

Woke up early to hit the Breaking Dawn panel line for Hall H. We secured a spot in line on the lawn about halfway in so we knew we would have no problem getting in to the panel. The fans who had camped out were served breakfast by some surprise visitors. Several members of the Twilight cast walked around to chat and take pictures with fans. I thought it was very classy of Nikki Reed, Elizabeth Reaser, Ashley Greene, Julia Jones and Booboo Stewart to surprise the fans like that. Meanwhile, my husband and daughter left to try to secure 2012 Comic-Con badges. These go on sale every morning for a limited amount of time, and by the time they arrived they had unfortunately long sold out for the day. 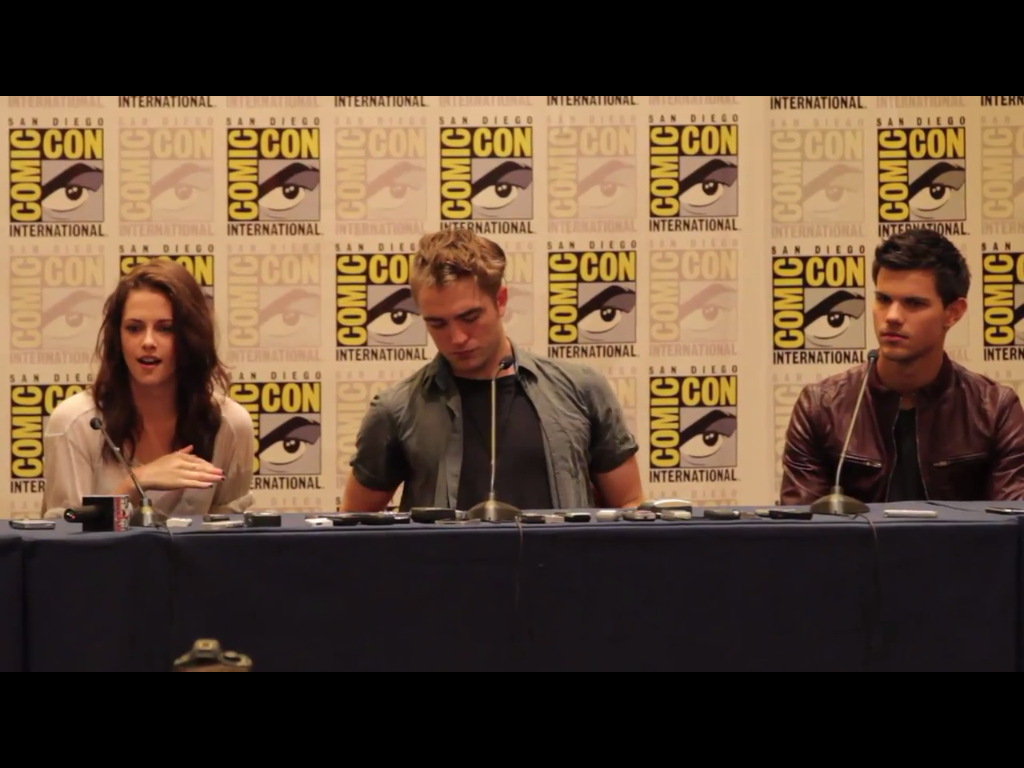 We finally entered Hall H for the 11:15 Breaking Dawn panel. It didn’t appear to me that Hall H wall filled to capacity, which seemed like a trend this Comic-Con where the TV panels in Ballroom 20 were the place to be. The main cast and director Bill Condon were there to show two clips from the Breaking Dawn, including a steamy scene from the honeymoon. The footage looks good so far.

After that panel we headed to the Magic & Monsters author panel featuring Kim Harrison, Andrea Cremer, Lev Grossman, Diana Rowland and more. They discussed the magic in their books and the magical creatures that they write about. After that lively panel my daughter and I took off for the Summit booth to queue up for Veronica Roth’s signing. Summit is releasing the film adaptation of Divergent and invited the author to sign posters to promote the upcoming film. My daughter and I both loved the book and were excited to meet her. My daughter even wore her “Dauntless” shirt that day. About an hour or two before the signing, dedicated Divergent fans lined up with their books in hand. The author arrived and signed posters for us, and wrote “Be Brave!” in her book much to my daughter’s delight.

Next we circled back to the Magic & Monsters signing where we met a lovely Andrea Cremer who signed our copies of Wolfsbane (she wrote “Keep on the wild hunt”) and Nightshade (she wrote “Dream Wild.”) Finally we ended the day at The Scoop at Simon & Schuster panel where we learned about upcoming book releases. They gave away t-shirts promoting Clockwork Prince and several books. We didn’t end up winning any books, but at least we got the t-shirt. It was S&S first book panel and they did a great job highlighting Fall book releases.

At this point it was 8pm and time to get dinner and get ready for another early morning! Stay tuned to find out if we ever were able to score tickets for 2012 or find the elusive Mockingjay pin at the Lionsgate booth.

The giveaway has ended and winner has been notified. Thanks to all who entered!

Waiting on Wednesday: Divergent by Veronica Roth
#VoteAllegiant
What I Did at Comic-Con
I Heart Kindle Deals