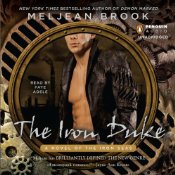 The Iron Duke is an entertaining start to the Iron Seas series with plenty of adventure, steampunk elements, mystery, romance, pirates, and even zombies. I don’t have a lot of experience with the steampunk genre, and in fact the only other steampunk series I’ve read is the Parasol Protectorate books. I enjoyed getting my feet wet with steampunk in that series so was eager to read more. In this book, some of the technological details went over my head, but in general the overall world building and strong characters kept me engaged and interested to seek out other steampunk books.

Mina Wentworth is a detective called in to investigate a body found at the home of Rhys Trahaearn, aka the Iron Duke.  Through the investigation, Mina and Rhys uncover a bigger plot that threatens the future of all of England. They need to work together to stop the threat, and meanwhile deal with the complication of their growing feelings toward each other.

The main character, Mina, is from an upper class family, but is an outsider in society. She has a cautious manner about her and is a smart and capable investigator who can take charge of a situation. I liked her a lot and she’s one of the main reasons I found the book so enjoyable. The side characters also add a lot of interest to the story. Rhys is a strong and possessive male lead and ex-pirate who behaves erratically at times and his relationship with Mina is definitely a rollercoaster.

Honestly I felt the book is less successful when it ventures off into romance novel territory. I found some of the explicit romantic scenes distracted rather than enhanced the story it set out to be. Usually I welcome the romance side of the story, but in this book the other aspects of the story interested me more.

Regarding the audio production, listening to the book in audio format really made the book for me. Narrator Faye Adele expertly brings the characters to life, provides distinct characters voices and conveys the appropriate emotional intensity needed for the story. It felt like I was listening to a play, and the attention paid to the narration kept my interest level high so that the 13-hour audiobook flew by.  I’m glad the narrator returns for the sequel.

There is also a prequel available called Here There Be Monsters which I haven’t had a chance to listen to yet. I look forward to continuing on with this series, and diving into the sequel Heart of Steel. This is a good kickoff for the series and has a lot to offer for steampunk fans and as an introduction to the genre.

Other Reviews of the audiobook:

One thought on “The Iron Duke by Meljean Brook: Audiobook Review”