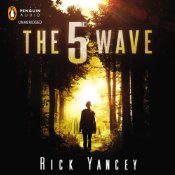 The 5th Wave is impossible to ignore right now, and arguably the hottest YA book of the summer. I don’t read a lot of science fiction so I was wary about an alien invasion book described as The Passage meets Ender’s Game. But, all the rave reviews and Hunger Games comparisons got to me and soon I had the 5th Wave fever. The 5th Wave is thrilling like a rollercoaster and fun like a summer popcorn movie. And I think it’s accessible enough for the casual sci-fi fan and very much a human story. It’s one I picked up in hardcover because I know it’s going to be a book I can loan out to a wide variety of readers.

In Rick Yancey’s The 5th Wave, civilization as we know it has been wiped out by alien invaders in four devastating waves. The aliens want to get rid of the humans but leave the earth in good shape for themselves. These aliens are smart and have done their homework on how to exterminate the human race. Cassie is a teen who miraculously survived the first four waves with most of her family intact. She gets separated from her younger brother Sammy though, and the goal to get him back is what’s keeping her alive. Meanwhile she’s dodging aliens (nicknamed “the Others”) and hoping there won’t be a fifth wave.

In addition to Cassie and her brother Sam, we meet a character referred to as “Zombie”, and the mysterious Evan Walker who gives shelter to Cassie when she’s on the run. The story kicks off with Cassie’s POV but changes setting and characters with Zombie’s perspective. I clicked more with Cassie’s story and preferred being in her head, but the dual POV does give the reader a wider view of all the happenings. One drawback for me is that with the change in perspective I felt a little detached from the characters. Ideally, I would prefer the book was only from Cassie’s POV even though I get it from a storytelling perspective.

The chapters are short and action packed. The story drew me in quickly and I could feel the hopelessness and desperation the characters faced. It’s a scary story; partly because it seemed so realistic I could buy into the terror of it all.

I mentioned there are two guys in the story, right? So, yes there is some romance and it’s not without its complications. I liked that the romance doesn’t take over the book but it is there to break up some of the tension of the alien attack. I wouldn’t call this an alien romance exactly in the vein of Jennifer L. Armentrout’s Lux series, but it is there and I’m curious to see where it goes.

I listened to the audiobook read by Phoebe Strole and Brandon Espinoza, both new-to-me narrators. I’m happy that I listened to the audiobook because it was easier to keep track of the different perspectives with different male and female narrators. Phoebe Strole’s voice reminds me of narrator Emma Galvin (Divergent) combined with Sarah Drew (Delirium). She sounds age appropriate for sixteen-year-old Cassie and conveys her toughness & sarcasm as well as her vulnerability. I liked her quite a lot. Brandon Espinoza also does a fine job with the male voices, and he in particular has to voice a variety of ages and personalities. Both read with a pace to my liking and increased the intensity as the story dictated. I’d recommend listening to the audiobook of this one to really let you escape into the story. I’m going to read it in print to get that experience as well.

I do think this book is a natural sell to Divergent and Hunger Games fans and has crossover appeal for any type of reader. The ending really makes me eager for the next book in the series, though we have a long wait on our hands. Bring on the movie!

Rules Of Summer by Joanna Philbin Book Playlist and Giveaway

Book Review: The Strange and Beautiful Sorrows of Ava Lavender
Waiting on Wednesday: Possess by Gretchen McNeil
Waiting On #scandal by Sarah Ockler
Show that your quest for truth and justice will NEVER FADE Giveaway

8 thoughts on “The 5th Wave by Rick Yancey Audiobook Review”