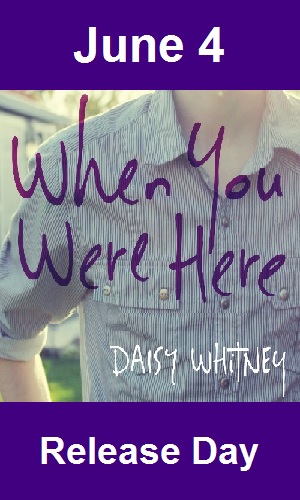 I just finished reading the lovely When You Were Here over the weekend, and I’m excited to tell you about it on the occasion of its book birthday! Daisy Whitney’s latest book is about grief, love, life, healing, friendship, and Tokyo and has a male POV. This book was a WOW pick for me a few months back, and since I’m a fan of Whitney’s Mockingbird series I came into it with high expectations. I’m pretty stingy with my 5-star ratings, but I was really touched by this book and rated it 5-stars with no reservations. It even made me a little teary eyed at the end, and I’m not much of a crier! If you like contemporary YA, and authors like Gayle Forman and Jessi Kirby, you should give this one a try. 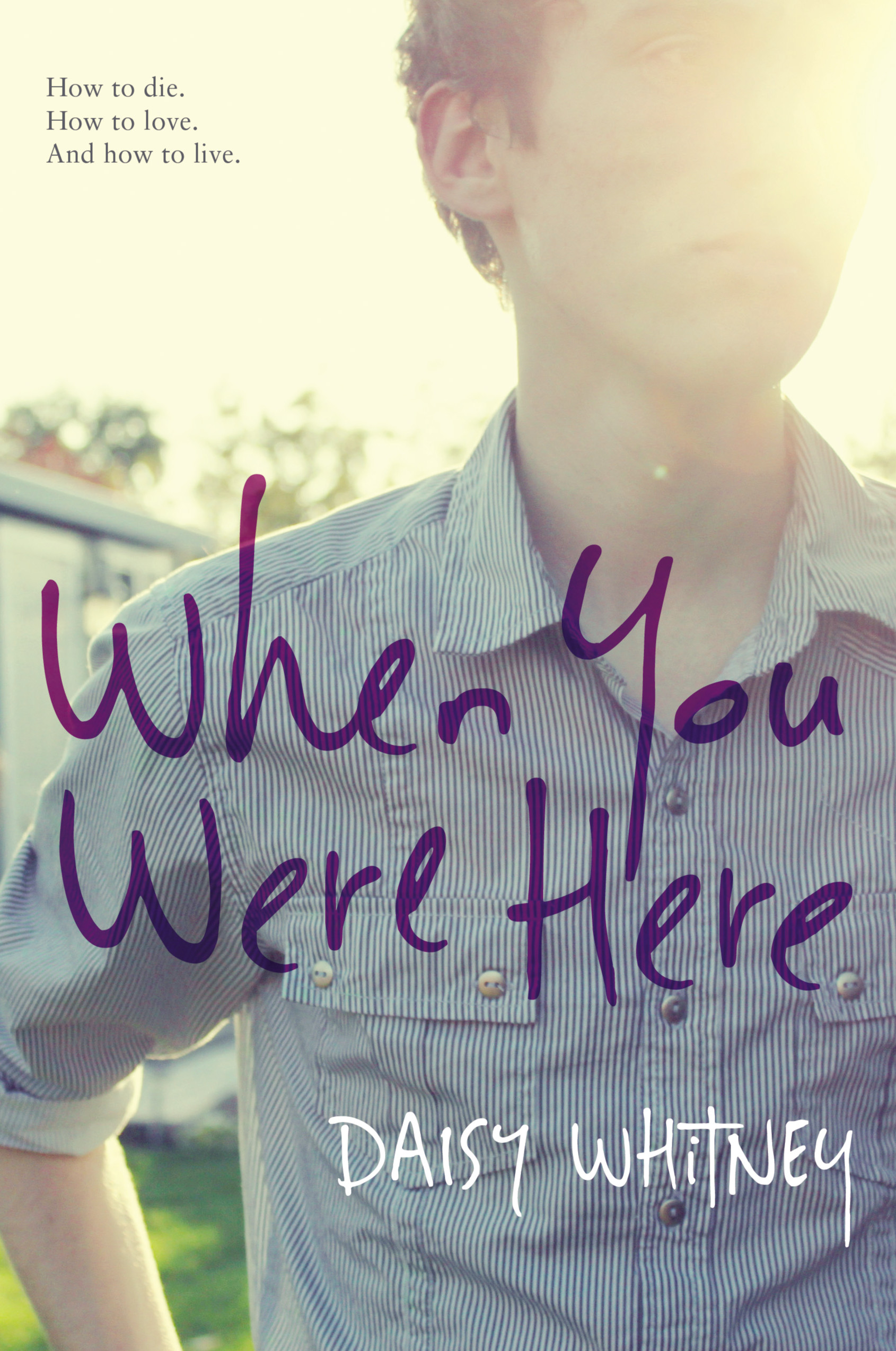 In When You Were Here, Danny has recently lost his mother after a long-term battle with cancer. She was hanging on as long as she could to see him make his high school Valedictorian speech, but it was not to be. Danny is feeling very alone since he already lost his dad, his sister moved away, and his girlfriend Holland ended things when she moved on to college. All he has left is him beloved dog Sandy Koufax. Danny’s mom loved Tokyo and even had an apartment she lived in while she was undergoing treatment. Now that Danny is out of high school and figuring out his next steps, his path leads him to Tokyo for a much-needed change of scenery and maybe some solace and answers.

First of all, I avoid books about dying/dead moms since that is a raw topic for me. I read this book on the anniversary of losing my own mom in fact, though I didn’t plan it that way. I did not find this book to be down and depressing though, and actually found it to be pretty comforting. Danny’s journey is quite healing and has some joyful, uplifting moments in fact.

The male voice is refreshing and Danny sounds and thinks like a guy.  He’s sad, confused and hurting and it’s satisfying to see how his story plays out. There are some curveballs thrown at him along the way that keep the story fresh. I liked being in Danny’s head and could relate to his situation and wanting to find some closure.

The trip to Tokyo is really fun, and has me itching to go there. Whitney packs a lot of Tokyo flavor in the book with the yummy noodle stands, desserts, teahouses, fashion, and hustle bustle of the city. Danny becomes friends with Kana, the girl who is taking care of his apartment when he’s home in California. She’s cute and fun loving and loves jelly crepes and dressing up in wild outfits. She’s just the person that Danny needs at the right time. And thank goodness for platonic friendship. It’s so refreshing that there isn’t a love triangle. And all along Danny processes his feelings for his long time love Holland, and that is an interesting journey on its own.

So if you can’t tell I really loved this one and found it really touching and satisfying. The tone is just perfect and gets the grieving process very right. My new fave book by Daisy Whitney for sure.

Want more of a taste of the book? You’re in luck! Daisy Whitney is sharing a Danny & Holland scene with us today:

We eat in silence for a minute, then Holland breaks it. “So you’re  going to Tokyo?”

“Your mom told you?”

“Did your mom send you to get info out of me or  something?”

“No. She mentioned it, and now I’m mentioning it. Why? Is there info to get? Are you going with a girl?”

I scoff. “Yeah,  right. I was supposed to go with someone, but it didn’t work out,” I  say, my eyes locked on her  the whole time.

“So did I,” I say, so  low it’s a whisper. But she hears me,  and she inches her hand across the counter, just a little bit closer,  and that hand, I want to grab it and hold on.

“Me too,” she says, barely there, barely painting the space between us  with all that has been broken.

I glance at our hands, so close all it would take is one of us giving an inch.

“I bought my ticket an hour ago.”

“When do you leave?”

“A couple days from now. I found a good deal.”

She nods a few times,  taps her fingers. I can feel the  warmth from her hands. “Cool,” she says, and we stay like that. One  stretch is all it would take to be back, so I wait. Wait for her to  tell me she’ll miss me, to ask me to stay, to put her hands on my face  and press her lips against mine and kiss me like it’s the thing that’s  been killing her not to do for all these months. That it’s not cool  for me to go. That if I go, she’ll be the one who’s sad.

But she doesn’t. We just finish our food, and she washes the plates,  and the other ones that were in the sink too, and she tosses out the  cartons from Captain Wong’s and bags up the garbage, and she’s like a  nurse. She’s here as a nurse. To take care of me. To make sure I eat  enough food and clean the house and take my vitamins.

I watch her take my vitals and check my temperature and adjust the  tubes, and when she suggests we watch a movie, here on the couch, I  just nod because my heart isn’t beating fast enough anymore, blood  isn’t pumping smoothly enough anymore for me to find the will to say  no like I did last night. Evidently I can buy tickets to fly out of  the country, no problem, but I can’t even tell Holland to stop being so near  to me all the time but not near enough.

Because she is supposed to want to go to Tokyo with me now. She is  supposed to invite herself, to ask me in that sweet and sexy, that  bold and confident voice, to say that I should take her along, that we  promised we’d go together, that we even talked about it last summer.

As if I needed reminding. As if I were the one who’d forgotten.

Instead she turns on the TV and finds a film where the hero survives a  bridge being blown up. We stay like that through fire and bombs,  through fists and blows, through a knife fight in an alley, a foot  away from each other, not touching, not moving, not talking, not  curled up together, just staring mutely at the screen.

But faking it becomes too much for me, so when the hero clutches the  crumbling concrete from the bridge, scrambling for purchase, I stand  up and leave the living room, mumbling, “Be right back.”

I walk to the bathroom at the end of the hall. I shut the door. I head  straight for the window. I slide it open and pop out the screen. I  stand on the toilet seat, then climb the rest of the way out of the  window and hop into my front yard. I close the window, and I walk and  I walk and I walk.

When I return an hour later, my greatest hope is she’ll be gone. My  most fervent wish is that I will have made my great escape from her,  from her hold on me. But instead I  find her sound asleep on my couch, Sandy Koufax tucked tightly into a  ball at Holland’s bare feet.

I kneel down on the tiles where the book she was reading has slipped  out of her tired hands. It’s a paperback, The Big Sleep. I run a thumb  across the cover, wondering when Holland developed a penchant for  Raymond Chandler. There was a time when she would have told me her  favorite parts. When she would have tried to tell me the ending  because she just loved it so much, she had to share, and I’d have held  up a hand and told her to stop. Laughing all the time. Then I’d have  read it too, and we’d have walked on the beach and talked about the  best parts. We’d have done that tonight with the movie too. Imitated  the actors’ inflections at their most over-the-top moments, then  marveled at the blown-up buildings.

I shut the book we’re not sharing. The ending we’re not talking about.  I place it on the coffee table and walk upstairs, because if I stay  near her, I will wake her up, rustle a shoulder, and ask her. Ask  her why she left. Ask her why she’s here. Ask her what changed for  her.

When I get into my bed, I am keenly aware of her in my house, as if  the rising and falling of her breathing, the fluttering of her  sleeping eyelids, can somehow be seen and heard from a floor above. I  imagine her waking up, walking up the stairs, heading down the hall,  standing in my doorway, a sliver of moonlight through the window  sketching her in the dark. I would speak first, telling her the  truth—that I’m still totally in love with her. That nothing has  changed for me when it comes to her.

Everything else is so muted, so fuzzy, so frayed around the edges. This—how I feel for Holland—is the only thing in my life that has  remained the same. Everyone I have loved is gone. Except her. Holland  is the before and the after, and the way I feel for her is both lethal  and beautiful. It is like breathing, like a heartbeat.

She would say the same words back to me, that she feels the same. Then  she would say my name, like she’s been searching for something, like  she’s found the thing she’s been looking for. 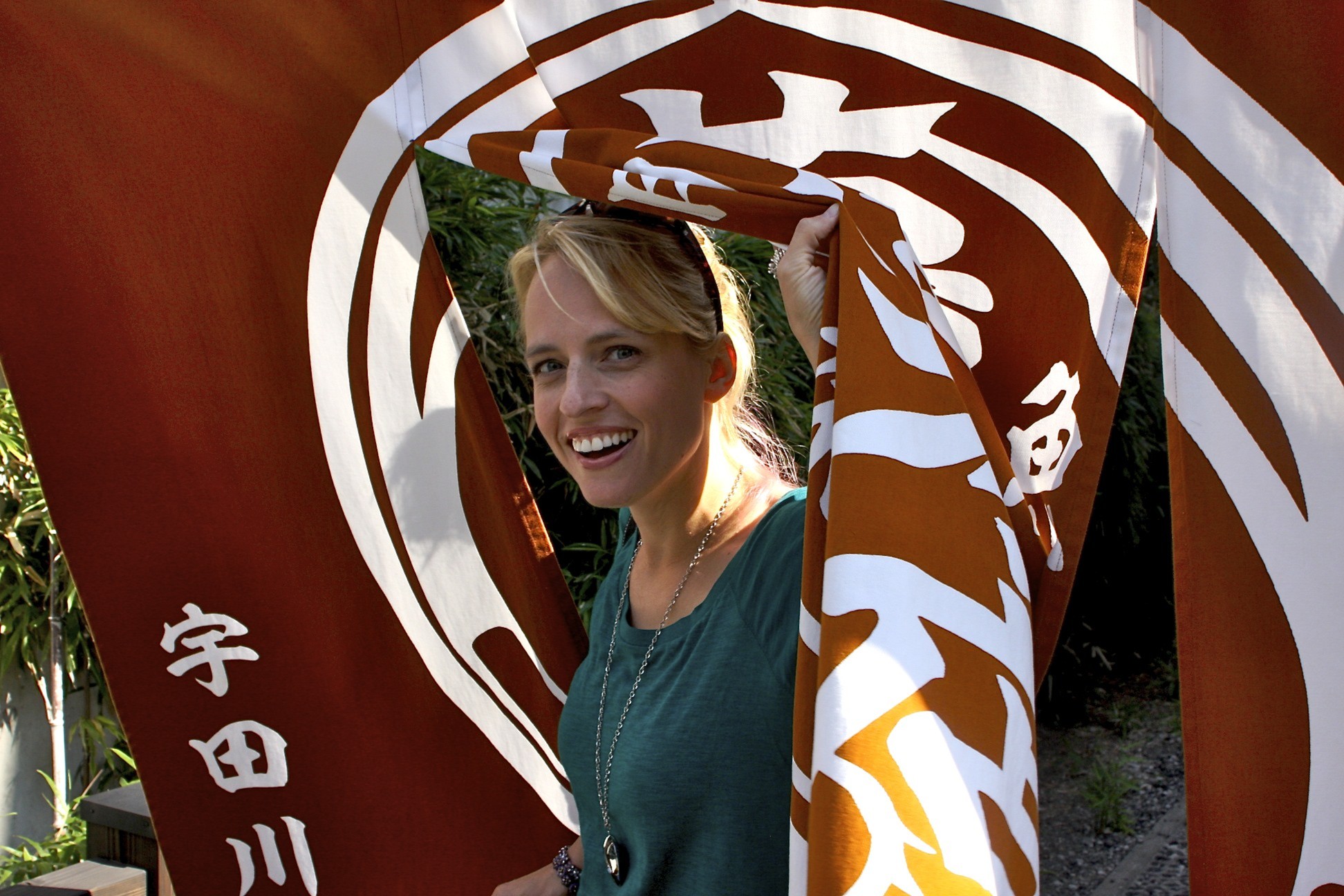 By day, Daisy Whitney is a reporter and ghostwriter. At night, she writes novels for teens and is the author of THE MOCKINGBIRDS and its sequel THE RIVALS (Little, Brown). Her third novel WHEN YOU WERE HERE releases in June 2013 (Little, Brown), and her fourth novel STARRY NIGHTS (Bloomsbury) hits shelves in September 2013. When Daisy’s not inventing fictional high school worlds, she can be found somewhere north of San Francisco walking her adorable dog, watching online TV with her fabulous husband or playing with her fantastic kids.  A graduate of Brown University, she believes in shoes, chocolate chip cookies and karma.  You can follow her writing blog and new media adventures at DaisyWhitney.com.

When You Were Here is on sale now: Amazon | Barnes & Noble

Giveaway! Enter the rafflecopter giveaway for a chance to win one of three signed personalized copies of When You Were Here! I’m a little jealous of the winners 🙂

Thanks to InkSlinger PR for hosting the blog tour and providing a review copy of When You Were Here.