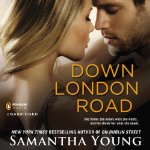 Book: Down London Road by Samantha Young, Penguin Audio, May 7, 2013

Johanna Walker is used to taking charge. But she’s about to meet someone who will make her lose control….

It has always been up to Johanna to care for her family, particularly her younger brother, Cole. With an absent father and a useless mother, she’s been making decisions based on what’s best for Cole for as long as she can remember. She even determines what men to date by how much they can provide for her brother and her, not on whatever sparks may – or may not – fly.

But with Cameron MacCabe, the attraction is undeniable. The sexy new bartender at work gives her butterflies every time she looks at him. And for once, Jo is tempted to put her needs first. Cam is just as obsessed with getting to know Jo, but her walls are too solid to let him get close enough to even try.

Then Cam moves into the flat below Jo’s, and their blistering connection becomes impossible to ignore. Especially since Cam is determined to uncover all of Jo’s secrets…even if it means taking apart her defenses piece by piece.

So, I really liked On Dublin Street, the first book in this series, about a different couple, Braden and Joss. That book totally took off as a self-published e-book before the relaunch with Penguin. It came out when there was a flurry of erotic new adult books, and sometimes all of them blend together. But, what I think sets this series apart is the witty writing; great characters, heart and angst, and that there is some plot beyond the sex. I liked Braden and Joss a lot and worried that this book wouldn’t have the same spark without them, but Jo and Cam were just as appealing, and many other familiar characters make appearances as well.

Down London Road is a companion book to On Dublin Street, and works just fine as a stand-alone. Young gets the reader up to speed on the other characters in the book. In fact, it’s been awhile since I read On Dublin Street and I had no problem following along.

Each book in this series centers on a different couple, and all the books take place in Edinburgh, Scotland. Johanna/Jo is Joss’s co-worker at the bar Club 39, so we’re a little familiar with her. She is used to trading on her looks to meet “sugar daddies” to help her financially since she’s already supporting her mom and little brother by working two jobs. There’s more to the story about Jo and her family situation though, and we learn all the nitty gritty details of her life in this installment.

Jo is her own worst critic and has low self-esteem, but she has good intentions and works hard and is a good friend. Cam is the hot, tattooed, part-time bartender/graphic designer who makes some assumptions about Jo and calls her out on it. He comes on strong with his disdain for Jo, but he sees through her facade eventually and becomes someone she can lean on. And of course, their chemistry is off the charts.

The romance is the slow burn type and is touch and go for a while. Both Cam and Jo have issues they are dealing with that keep them apart. I liked that they had to work at the relationship and that made it more satisfying.  The pair definitely gives Braden and Joss a run for their money in the hotness category.

I listened to the audiobook, read by Elle Newlands. I read the first book On Dublin Street, and was excited to get the chance to experience the companion book via audio. What’s great about the audiobook is that the narrator was born and raised in Scotland so she reads with a great Scottish accent. It really brings the Edinburgh setting to life for the listener. The character of Joss in the first book is American and Newlands does just fine with that accent as well. I definitely want to continue with this series via audiobook- it’s a book I didn’t want to stop listening to. Newlands really gets inside the core of the characters, and infuses them with personality.

Down London Road is funny, sexy and dramatic and has a wonderful cast of characters. I’m a big fan of Samantha Young’s writing skill and eagerly await her next book. In fact, there’s a novella just out this week called Until Fountain Bridge that centers on Braden’s sister Ellie, and his friend Adam. I’ve listened to it already and should have a review up very soon. Book three in the series is called Before Jamaica Lane, and is due out in January 2014. Looking forward to Olivia and Nate’s story! In the meantime I might have to go back and listen to the audio of On Dublin Street.

Here’s an audio clip from Down London Road with Elle Newlands. Isn’t her voice great?

7 thoughts on “Down London Road by Samantha Young Audiobook Review”