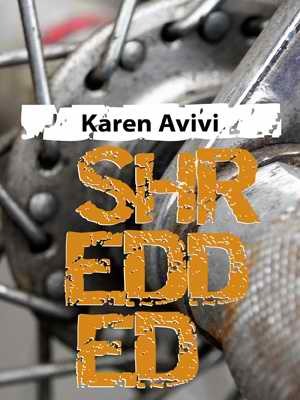 Book: Shredded by Karen Avivi, published by the author, April 2013

Drop into the world of girls’ freestyle BMX for an action-packed summer road trip adventure.

Josie Peters thinks she’ll do anything to qualify for the Ultimate BMX freestyle event the summer before her senior year. She can handle road trips and back flips, but when flashy rider R.T. Torres tempts her with an easy “in,” the sacrifices required threaten to send Josie spinning out of control.

What is it that makes Sports YA so appealing even for non-sporty readers like myself? Before reading Shredded, I’d had no exposure to the world of BMX. But, I like the adrenaline rush I get from sport-themed reads and the way it introduces me to new experiences. I think the stories are so inspiring, with strong, motivated characters who put it all out there.

Shredded is all about girl power in the world of competitive BMX freestyle, a sport where guys dominate. Josie and her teammates want to be taken seriously, not to provide eye candy and be the token girl players. There are many obstacles on the road to the big tournament and Josie has to decide what type of player she really wants to be.

Josie’s boyfriend just dumped her and now she has to find a new place to train, since they used to ride together. That leads her to team up with a couple of other girls who are also into BMX. Could her hobby really take her places? Her parents support Josie’s brother in his baseball endeavors but don’t take Josie’s interest in BMX seriously. Now that she has a goal to compete in tournaments over the summer, she has to use all the connections she’s got to make it happen.

Josie has an uphill battle to climb. Girls just aren’t seen as contenders in BMX, so she and her teammates have to work double time to prove their worth, and to get the attention of sponsors. It’s tempting to tag along with a guys team or take other shortcuts to get ahead, and Josie faces some ethical challenges.

This book is inspiring, action packed and such a rush. These girls are kick-ass and can hold their own with the guys. When they fall they just brush it off and get back up again. There is a lot of support among Josie, Lauryn and Alexis, and even the girls from different teams. They push each other to be better and master new tricks, and don’t tear each other down. There are even some strong guy-girl friendships and support along the way.

There is a little romance in Shredded but it’s not the focus by a long shot. Josie is getting over her boyfriend, and there’s someone else she’s interested in, and her friends Lauryn and Alexis also have guys in their life. The romance was the weakest link for me, but it does balance out the BMX action to have a prom side story. One guy that stood out for me in the story is Connor and I really liked their friendship.

The sexism in the sport makes the reader root for Josie all the more and see how she can make a difference. It’s inspiring to watch the lightbulb turn on for Josie as she figures out what she wants to do with her talent.

I was impressed with the caliber of writing – the book is well edited, engaging, and kept my attention. Make sure to hand this one to your daughters and their friends. Looking forward to more high adrenaline reads from Karen Avivi.

Check out this short film about girls freestyle BMX to see what it’s all about:

I read Shredded for the Cybils YA Fiction category.

In My Mailbox (32)
Blog Tour: Poison by Bridget Zinn
Favorite Diverse Titles of 2014
How I Fell for New Adult
Cybils YA Fiction Winner and Giveaway