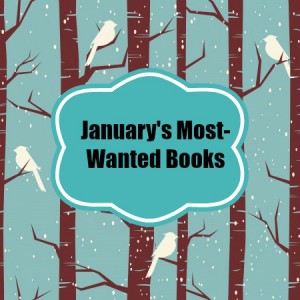 Happy New Year! Are you excited for all the new books to come? I feel like the first book I read in the New Year sets the tone for my reading…so much pressure! I haven’t decided what my first book of the year will be, but maybe it will be one of these 10 books debuting in January.

Jonesing for January: Most Wanted Books

Girl Before a Mirror by Liza Palmer – Jan. 27, William Morrow Paperbacks. A divorced ad exec goes to a romance writing conference on a quest to sign a client and learning how to be the heroine of her own story.

The Sweetheart by Angelina Mirabella – Jan. 20, Simon & Schuster. This 1953-set coming-of-age story is about a female wrestler.

The Girl on the Train by Paula Hawkins – Jan. 13, Riverhead Hardcover. This book is described as a Hitchcockian thriller, and it’s about a commuter who sees something shocking on the train. Train is drawing comparisons to Gone Girl.

The Grown Ups by Robin Antalek – Jan. 27, William Morrow Paperbacks. This is a story about a group of teenage friends and how their friendships evolve over a decade.

Never Never by Colleen Hoover and Tarryn Fisher – Jan. 11, Hoover Ink. There’s not much known about this book yet, but Hoover says, “Some books are relatively easy to put into one genre, but with Never Never, it’s almost impossible. It’s contemporary romance…it’s suspense…there’s a slight touch of other-worldly elements (depending on who you are and what you believe) and it might even be sufficient to say it’s a drama. And a comedy. Maybe even a tragedy? Heck, it’s a little of everything.”

The Five Stages of Andrew Brawley by Shaun Hutchinson – Jan. 20, Simon Pulse. This is a “partly graphic novel” about Andrew, a boy who just lost his family. He’s living and hiding in the hospital and that’s where he meets Rusty, a boy burned by bullies. It sounds like a tear-jerker.

I Was Here by Gayle Forman – Jan. 27, Viking Juvenile. Forman’s latest is about the mystery of a best friends’ suicide, and the effects in the survivors.

All the Bright Places by Jennifer Niven – Jan. 6, Knopf. This book about mental illness, friendship, love and loss is getting some amazing reviews. This would be my first book of the year, but I’m way down the library list for the audiobook.

What books are you excited to read this month?

5 thoughts on “Jonesing for January: Most Wanted Books”