How to Say Goodbye in Robot is a 2009 YA title from Natalie Standiford. I recently grabbed the audiobook from Paperback Swap (good place to find under the radar books you may have missed the first time around) and really enjoyed listening to it. It is not about robots or anything SciFi, but is in fact about friendship, family, and mental health. The audiobook is read by Kate Rudd (The Fault in Our Stars) and features several other performers for the “radio show” portions of the audiobook. Look how cute the cover is! 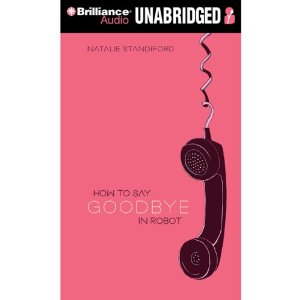 What’s it about? The story is that Beatrice (Bea) is just starting her senior year of high school in a new city. Her family moves around a lot for her dad’s teaching job so Bea is used to being the new kid. She soon meets Jonah aka Ghost Boy, the school outcast, and they bond over a late night radio show, family drama, and feeling like outsiders at school. The title is a nod to Beatrice’s “nickname” from her mom who thinks she’s a little cold and remote. Bea’s mom on the other hand feels too much, crying over the death of her new pet gerbil, and just acting generally off. Jonah has some skeletons in his closet too, and Bea becomes his partner in crime as they navigate through the school year.

The friendship between Jonah and Bea is intense and a love that’s not romantic – something that we don’t often see in YA. Jonah’s classmates tease him and see him as the loner, but since Bea is new he can have a fresh start with her. Their friendship is complicated though and Jonah runs hot and cold- he’s either jealous of her friendships / potential romances or pushing her away.

Mental health is another theme of the book, and Standiford keeps you guessing over what’s going on with Bea’s mom. Is she dying or going through a mental health crisis or what? Secrets abound in this book.

This book holds up really well – there are a few pop culture references that date the book but overall I think it’s relevant today. I could relate to Bea because I also started my senior year at a new school, though Bea makes it look pretty easy, probably because she’s used to changing schools a lot.

Natalie Standiford’s story is pretty gutsy – it’s messy and complicated and doesn’t tie up neatly in the end. And the idea of the radio show and the connections we make over the airwaves (or online) was a lovely touch.

I listened to the audiobook, performed by Kate Rudd, with appearances by Jim Bond, Sandy Burr, Luke Daniels, Mel Foster, Phil Gigante, Teri Clark Linden, Laural Merlington, Arthur Morey & Kevin Yon. As I mentioned, the main characters Bea and Jonah listen to a late night radio show called The Night Lights, and one very cool thing about this audiobook is that the radio show is brought to life by the full-cast. It sounds like you are listening to an actual call-in radio show, with a DJ, musical snippets and sound effects, and a full cast of callers.  There are many quirky characters that call in and the narrators play that up and make it a hoot to listen to. This audiobook is worth the price of admission just for the radio show portions alone, though Kate Rudd is awesome as always too. Rudd captures the right emotional tone for the story, reads with a good pace, and enhances the text by using different voices that are easy to differentiate.

Read How to Say Goodbye in Robot if you like – Realistic YA with more friendship and less romance, mental health stories, and quirky and complicated characters.

My True Love Gave to Me Audiobook Review
The Wild Ones by M. Leighton Book Review