The Movie Date is a weekly feature where we discuss movies that may appeal to the YA audience. Andrew is The Reading Date’s resident movie critic and this week he discusses THE DIVERGENT SERIES: INSURGENT, based on the book by Veronica Roth, and directed by Robert Schwentnke. 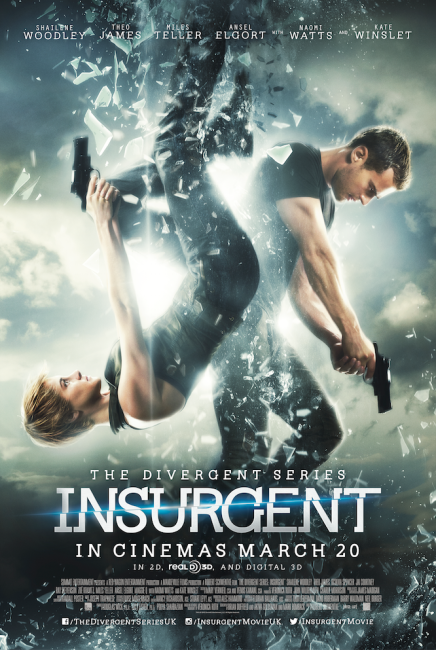 I was really into the Divergent series a few years ago. And even though the final book Allegiant wasn’t exactly my cup of tea, I like to support the YA adaptations and I was curious to see Insurgent’s big-screen treatment. It wasn’t my favorite YA adaptation but it was pretty entertaining. Shailene Woodley rises to the occasion as Tris, and Miles Teller provides some welcome comic relief as Peter.

Andrew hasn’t read the series so went into the Insurgent experience with fresh eyes:

Though living peaceably with the Amity faction, psychically gifted Tris longs to assassinate Jeanine, a leader who is seeking out Tris’ abilities to unlock a device.

Though the reviews have not been encouraging, Lucy and I went to check out the second film in the Divergent series. Much to my surprise I enjoyed it quite a bit; I think I actually had more fun with it than the first film! As noted in my Divergent review, I found the whole faction premise somewhat cumbersome as it required so much explanation. And like so many action films with origin stories, it spends a long time setting up its heroine, giving her only a mini-adventure at the end. In Insurgent Tris comes out of the gate fully aware of her powers and confidently kicking ass, and it’s thrilling to watch.

Tris, her boyfriend Four, brother Caleb, and friend Peter have escaped the city’s strife for a peaceful life gardening with the Amity crowd. But violence forces the first three to flee the compound for a train headed downtown. While aboard they’re attacked by a large contingency of Factionless rebels; Four reveals his true identity and is introduced to the group’s leader Natalie (Naomi Watts), with whom he shares an important connection.

Tris and Four then make their way to the Candor faction, where they stand trial for their war crimes via truth serum; Tris painfully confesses to killing their colleague Will, much to the anger of Will’s girlfriend Christina. Meanwhile in Erudite, Jeanine has been trying to unlock a device containing secret data; doing so requires a Divergent who can pass the “sim” tests of all five factions. And who better to crack the mechanism than troublemaker Tris herself?

Though Divergent featured the classic story arc of an ordinary person discovering their own extraordinary powers, author Veronica Roth and the filmmakers have given Tris an equally satisfying arc here, too. We’re shown again and again the torment Tris feels at having killed her friend Will and causing her mother’s death, and as such Tris’ journey towards self-forgiveness is a fundamental dynamic of the film. To me this was much more interesting than the first film’s recognition of Tris’ specialness (of course she is) or her hesitancy to fall for Four (of course she will). It was also great to see the excellent Shailene Woodley playing Tris as strong and confident throughout; indeed the character’s greatest challenge this time is rediscovering her own humanity and compassion.

For me the film had only one flaw: though sufficient for the story, Kate Winslet’s role as Erudite leader Jeanine isn’t written or played with much depth; it’s kind of a one-note “evil queen” characterization throughout. Speaking of Jeanine, we got some insight into that character via an exclusive video interview with Veronica Roth shown at the film’s conclusion. Rather than basing characters on friends and family as some authors do, Roth uses aspects of her own personality to inform the Divergent series’ characters. Jeanine is based on Roth’s own need to control everything!

This is less of a Cinderella story than Divergent and the romance takes a back seat as well. But for me it’s a very strong dystopian adventure flick with a fascinatingly complex heroine and, frankly, surprisingly enjoyable.

INSURGENT is now playing in theaters. This film is Rated PG-13 and runs 119 minutes.

If you haven’t read Insurgent, now’s a good time to snap up the ebook- it’s currently $3.99.

2 thoughts on “The Movie Date: The Divergent Series: Insurgent”