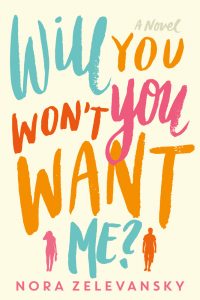 Marjorie Plum isn't your average washed up prom queen. After all, her New York City prep school was too cool for a royal court. Yet, ten years after high school graduation, she is undeniably stuck in the past and aching for that metaphorical tiara.

But when her life takes an unexpected turn, she is forced to start over, moving in to a tiny box of an apartment in Brooklyn with a musician roommate who looks like a pixie and talks like the Dalai Lama. Desperate to pay rent, she starts tutoring a precocious 11-year-old girl-who becomes the unknowing Ghost of Marjorie Past, beginning a surprise-filled journey towards adulthood, where she learns about herself from the most unlikely sources: a rekindled childhood love, a grumpy (but strangely adorable) new boss, even her tutee.
In Nora Zelevansky's charming second novel, Will You Won't You Want Me?, Marjorie soon realizes only she can decide: who is the real Marjorie Plum?

I’m excited to be the next stop on the Will You Won’t You Want Me blog tour! This book is about being a grown up but still not having everything figured out. Marjorie was the popular girl in high school and now she’s 28 and life’s not turning out the way she thought it would.  It’s 2012 and Marjorie just lost her job and her NYC apartment, and now she has to start over and reinvent herself. It’s relatable to anyone that feels like they’re not where they should be by a certain age, and it’s a light and witty read.

Don’t you wonder what happened to all the popular people in high school? Did their popularity lead to great success out in the real world? This book shows that we are all works in progress. I was never popular like Marjorie (“Madgesty”) but can definitely relate to her journey of self-discovery. Once Marjorie gets out of her rut she’s able to take chances to find out what will really make her happy.

There is love and laughter in this quirky romcom. If you love chick lit consider giving this one a try!

Will You Won’t You Want Me is on sale now! Read on to find out more about the author and to enter to win a copy of the book.

NORA ZELEVANSKY is the author of Will You Won’t You Want Me? and Semi-Charmed Life. Her writing has appeared in ELLE, T Magazine (The New York Times), Town & Country, the Los Angeles Times, The Wall Street Journal and Vanity Fair, among others. She lives with her husband and daughter in Brooklyn, New York.

Enter to win a copy of Will You Won’t You Want Me! You know you want to!

Two winners will receive a copy of Will You Won’t You Want Me.

8 thoughts on “Blog Tour: Will You Won’t You Want Me? by Nora Zelevansky | Giveaway”