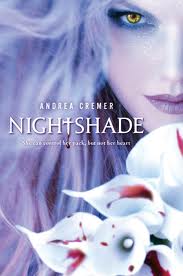 I was thrilled to receive an ARC of Nightshade at Comic-Con this year from Penguin. I have been reading a lot of YA books about werewolves and was really drawn to this one. The beautiful cover doesn’t hurt either.

Nightshade is Andrea Cremer’s exciting debut novel in the young adult fantasy genre. Nightshade’s protagonist is Calla Tor, alpha wolf for the Nightshade pack. Calla is a driven, fierce and loyal Guardian who is destined to marry Ren, alpha wolf for the Banes.  After they marry, their packs are to merge. They both report to the Keepers, and must follow their many laws to the letter. Life gets more complicated for beautiful Calla when she saves the hiker Shay from being mauled by a bear by healing him with her blood. He sees her change into a wolf, which is forbidden. She is surprised to see him shortly thereafter as the new student at school.

Nightshade includes magic, history and mythology, a lot of action, and a love triangle. It is interesting to see a female alpha and feel her struggle on her way towards choosing her path. Calla enjoys being a tough alpha and rebels against her softer side. She worries about her upcoming union with Ren, who is known to play the field, while she saves herself for him. Enter Shay, who has her questioning her role.

There is a lot of romance,  mystery, wolf politics and suspense in this fast-paced story. It was hard to put down and kept me guessing throughout. I was torn along with Calla on who to choose between Ren and Shay.

In addition to the love triangle, there are a lot of interesting and complex characters in Calla’s family and in the wolf packs. I’m looking forward to learning more about them in the sequels.

Even though I have read many books in the paranormal and werewolf theme, this one had enough of a twist on the genre to feel fresh for me.

My one criticism would be the pacing of the book. I was drawn in from the beginning, but the middle was a bit slow, and it was hard to keep track of all the characters and the mythology. The ending, however, is action packed and had me hooked.

The Nightshade trilogy is off to a thrilling start. The cliffhanger ending has me clamoring for the sequel Wolfsbane due out in 2011.

Recommended for readers of paranormal romance, fans of werewolves, and fans of The Dark Divine, Hush, Hush or Vampire Academy series.

If you would like to learn more about Shay, you can check out his blog.

Such a Rush by Jennifer Echols Book Review and Giveaway
Waiting on Wednesday- Pandemonium by Lauren Oliver
Review: Brightly Woven by Alexandra Bracken
Daughter of Smoke and Bone by Laini Taylor

One thought on “Nightshade by Andrea Cremer”