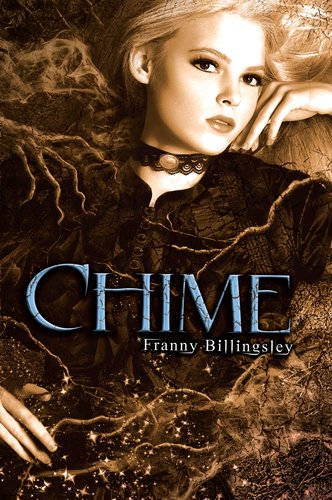 Before Briony’s stepmother died, she made sure Briony blamed herself for all the family’s hardships. Now Briony has worn her guilt for so long it’s become a second skin. She often escapes to the swamp, where she tells stories to the Old Ones, the spirits who haunt the marshes. But only witches can see the Old Ones, and in her village, witches are sentenced to death. Briony lives in fear her secret will be found out, even as she believes she deserves the worst kind of punishment.

Then Eldric comes along with his golden lion eyes and mane of tawny hair. He’s as natural as the sun, and treats her as if she’s extraordinary. And everything starts to change. As many secrets as Briony has been holding, there are secrets even she doesn’t know.

I fell in love with this magical book. CHIME is unique, funny and utterly original and completely deserving of the 6 starred reviews it has earned. The characters are eccentrically wonderful and the story is charmingly written and full of surprises. CHIME is a YA paranormal historical set in Swampsea village in turn of the century England. It includes fantasy and romantic elements that captivated me from start to finish. In addition to the mystery and romance, mystical creatures including Witches, Dark Muses, and Old Ones help to set the stage.

The characters in CHIME really bring the story to life. Briony is unusual in that she is self-loathing, but with a witty and clever sense of humor. As a narrator she is at times misleading as she leaves out some details. Briony believes she is a witch and that she is responsible for the sickness and death that have fallen upon her family. She keeps her fears to herself to avoid a witch’s prosecution.  Briony carries around a lot of guilt for the pain she believes she causes to those around her. She feels a terrible responsibility to protect the swamp creatures whose lives are threatened by the plans for the railroad that threaten their swamp home. She must stop the progress of the railroad before more children can be cursed with the dreaded swamp cough.

Briony starts to see herself in a new light when Eldric arrives to live with her family. Eldric is a burst of sunshine in Briony’s life that refuses to believe anything negative about her. The relationship between Eldric and Briony is very sweet and unique and one of my favorite parts of the book. They have a fun banter and respect for one another. Briony lives with her father and her identical twin sister named Rose who has some charming quirks about her. Rose is another one of my favorite characters that made me smile with her off the wall behavior. Their stepmother recently died under mysterious circumstances, and it seems like Rose knows more than she lets on.

The fantasy elements add a dark and eerie sensibility to the story. Briony tries to stifle her witch side, but keeps getting pulled into the supernatural world by the creatures that follow her around.

CHIME is a lovely and inventive story that is sure to appeal to fans of YA fantasy and fans of adult fiction. As soon as I finished the story I wanted to start reading it again. CHIME is one of my favorite reads so far this year.

7 thoughts on “Chime by Franny Billingsley”