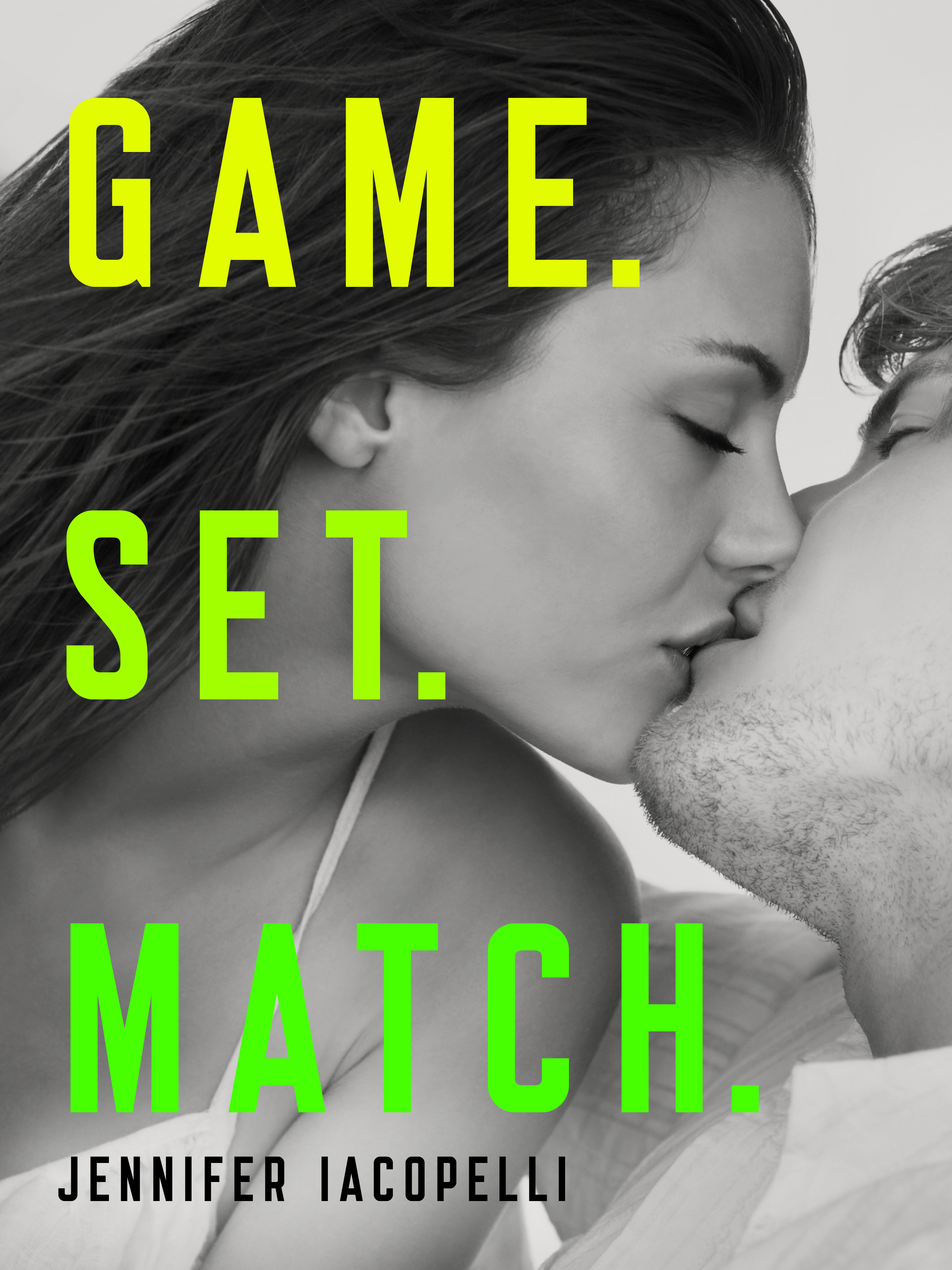 I like the black & white with the pop of lime color. The title treatment hints at a sports theme, but the kissing makes it clear that Game. Set. Match. is a romance.

The cover artist is Erin Fitzsimmons, the designer for Lauren Oliver’s Delirium series (both covers.) And the author is thrilled and says “I love how it focuses on the girl, because the girls are truly the heart of this series, plus the couple really looks like Penny and Alex, one of the three couples featured in the OBX series. That’s one of my pet peeves, when the models don’t look anything like the characters!”

Nestled along the coastline of North Carolina, the Outer Banks Tennis Academy is the best elite tennis training facility in the world. Head Coach, Dominic Kingston has assembled some of the finest talent in the sport. From the game’s biggest stars to athletes scraping and clawing to achieve their dreams, OBX is full of ego, drama and romance. Only the strong survive in this pressure cooker of competition, on and off the court.

Penny Harrison, the biggest rising star in tennis, is determined to win the French Open and beat her rival, the world’s number one player, Zina Lutrova. There’s just one problem, the only person who’s ever been able to shake her laser-like focus is her new training partner. Alex Russell, tennis’s resident bad boy, is at OBX recovering from a knee injury suffered after he crashed his motorcycle (with an Aussie supermodel on the back). He’s hoping to regain his former place at the top of men’s tennis and Penny’s heart, while he’s at it.

Tennis is all Jasmine Randazzo has ever known. Her parents have seven Grand Slam championships between them and she’s desperate to live up to their legacy. Her best friend is Teddy Harrison, Penny’s twin brother, and that’s all they’ve ever been, friends. Then one stupid, alcohol-laced kiss makes everything super awkward just as she as she starts prepping for the biggest junior tournament of the year, the Outer Banks Classic.

The Classic is what draws Indiana Gaffney out of the hole she crawled into after her mom’s death. Even though she’s new to OBX, a win at the Classic is definitely possible. She has a big serve and killer forehand, but the rest of her game isn’t quite up to scratch and it doesn’t help that Jasmine Randazzo and her little minions are stuck-up bitches or that Jack Harrison, Penny’s agent and oldest brother, is too hot for words, not to mention way too old for her.

Who will rise? Who will fall?

Told from rotating points of view, GAME. SET. MATCH., is a ‘new adult’ novel about three girls with one goal: to be the best tennis player in the world.

For some reason, even though I am not a sports person at all, I like sporty reads. The tennis competition aspect appeals to me, and I like that there’s multiple POV. Does the cover or synopsis pique your interest?

Audiobook Review: All the Bright Places by Jennifer Niven
Waiting On The Sound of Letting Go by Stasia Ward Kehoe
Mailbox Monday (113)
Deals for your Kindle (2)
Mailbox Monday (99)