Hey, fans of Cora Carmack’s Losing It series! The newest (and final) installment is on sale today! Seeking Her is a Finding It prequel novella featuring Jackson Hunt’s POV.

More about Seeking Her: 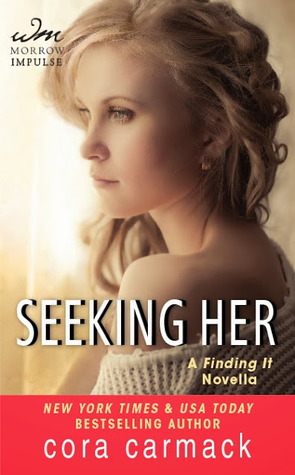 Jackson Hunt gets his turn in this Finding It prequel novella …

Jackson Hunt hasn’t been out of the military for long, but he needs to get a job and find a sense of normalcy if he is going to keep his demons at bay. The job that falls into his lap, though, is anything but normal.

Becoming bodyguard (and babysitter) to spoiled rich girl Kelsey Summers isn’t exactly what he had in mind, but it’s a chance to travel, to get away. The catch: Kelsey’s father doesn’t want her to know she’s being followed.

She’s vibrant and infuriating, exciting and reckless, mysterious and familiar. When Jackson sees her falling into the same patterns he suffered years ago, he decides it’s time to stop watching and help her instead. But getting to know Kelsey is more difficult than he thought, especially because the more he knows her, the more he wants her.

In the book Finding It, Jackson Hunt is hired to watch Kelsey, who is traveling around Europe. In this prequel novella we find out more about Jackson’s background and his first impressions of Kelsey. Both characters are a little dark and damaged in Finding It, and they find each other at just the right time.  I liked seeing their slow burn romance develop, and reading Jackson’s side of things is icing on the cake.

It’s interesting to get inside Jackson’s head to see what he was thinking when he was acting so mysterious. He struggles to keep his distance from Kelsey and keep things professional, and we get to see how difficult that is for him. Jackson’s voice is refreshing and a contrast to Kelsey’s party girl vibe.

This novella is a nice bonus sendoff for fans of the Losing It series. I’ve liked reading about the three couples featured in these books and I’ll miss these characters. But at the same time, I can’t wait to read what Cora Carmack comes up with next! Her new Rusk University series sounds awesome.

Here’s a sneak peak of Seeking Her from William Morrow Impulse:

I was going to have to find some way to cope with this. If not, I was better off calling Mr. Summers and suggesting he find someone else to take over his daughter-watch.

I felt a pang of something at that thought. It was a general kind of discomfort, and I wasn’t sure whether it was the thought of returning home or something else that made that thought so unappealing.

After the cooling walk earlier, and now standing under the cool, calming rush of water, it was easier to think that I could control myself, but I knew better. It always seemed easier in my head than it really was.

I wiped the water from my eyes, and tried to think of some other way to deal. There was always the hope that Kelsey would get bored. That she would mellow out. If she only partied a couple nights a week, I should be able to resist. But that seemed unlikely.

All that restless energy; the way she’d soaked up the attention from the people around her. I couldn’t see her giving that up. And it was working for her. She was still in the phase where partying made her feel good. That was the one thing that helped me stay clean. The few times I’d slipped up since I started the program had left me miserable and angry, and even more frustrated than when I started. I’d found new ways to chase the high. And maybe that wasn’t any healthier, not when one way involved being in the midst of flying bullets.

It wasn’t the same kind of rush, but it did the trick. I pictured Kelsey again, laughing with her head thrown back, her shirt falling off her shoulder and displaying the gentle curve of her neck. It reminded me of the way she’d tossed her head back that first day out in the woods.

The memory of that caused a different kind of rush in me, and I groaned, pressing my forehead into the tile. Before I could help myself, I pictured her long legs straddling that guy in the gardens. The bright green material of her bra, and the way it conformed to her perfect chest. She leaned back, her fingertips trailing from the bark of the tree to his shoulders.

In an instant, the memory shifted into fantasy, and those were my shoulders she clung to, not his.

That was my undoing. There was only so much resisting I could do in one night.

Losing It * Keeping Her * Faking It * Finding It

Add Seeking Her to your shelf: Amazon * Barnes & Noble * Goodreads

Enter the Rafflecopter giveaway for your chance to win a $100 American Airlines gift card and a signed copy of Faking It by Cora Carmack.

Cora Carmack is a twenty-something writer who likes to write about twenty-something characters. She’s done a multitude of things in her life– boring jobs (like working retail), Fun jobs (like working in a theatre), stressful jobs (like teaching), and dream jobs (like writing). She enjoys placing her characters in the most awkward situations possible, and then trying to help them get a boyfriend out of it. Awkward people need love, too. Her first book, LOSING IT, was a New York Times and USA Today bestseller.

4 thoughts on “Seeking Her by Cora Carmack Review, Excerpt and Giveaway”