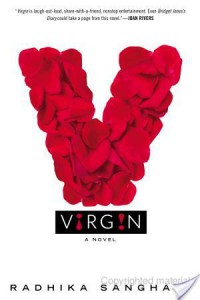 For those who grew up on Judy Blume—and graduated to Lena Dunham—a “hilarious”* debut... “Bridget Jones and Carrie Bradshaw, meet your wisecracking, vagina obsessed match. Sanghani's debut is a hilarious, irreverent look at smart-alecky, painfully self-concious, 21-year-old Ellie's relentless mission to rectify a disasterous first attempt at performing oral sex, get deflowered, find the perfect Brazilian wax, avoid her tradition-bound Greek mother's nagging, graduate summa cum laude, be a writer, and fit in...This story for millennials is a wonderful blend of modern agnst with old-fashioned sweetness.”—Publishers Weekly (starred review) “Even Bridget Jones’s Diary could take a page from this novel.

Virgin by Radhika Sanghani is a witty and fresh New Adult read about a twenty-one year olds quest to finally “lose it.”

Virgin tells you everything about the sexual prep work the traditional romance novels leave out- from waxing and shaving debacles to the how-tos of rounding bases. The reluctant virgin Ellie shares all her tragicomic sexual misadventures with her friends, who eat it up with a spoon. But when she realizes others may have the same questions she starts a vlog (vagina blog) to get her musings on sexual subjects out to a wider audience.

Ellie Kolstakis is in her last year at uni (the book is set in London) and hears about all her friends’ sexual antics, and even feels some virgin shaming at the campus doctor’s office. She just wants to have the deed done and over with but that’s easier said then done.

But cashing in her V-card is not the only thing on Ellie’s mind. She’s also stressing about her dissertation and on scoring some writing gigs for post-graduation. Ellie is naturally hilarious and that translates through her writing, so once she picks the right subject she’s golden.

The frankness in Virgin is refreshing, and sure to make anyone with the same questions as Ellie feel less alone. Sure, we have the Internet now to help answer burning questions about sex, but Ellie’s blog posts on the topic lend that personal touch, and plus her anecdotes are a riot.

Through a series of flashbacks and the dating disasters of her own and her friends, she learns a lot about herself and that she is more than just a label. She doesn’t have to bow down to social pressure thank you very much. There is also a sex positive, feminist vibe to Virgin that you don’t often see in New Adult – so yay for forging new ground in NA stories.

This book reminded me the most of Bridget Jones Diary so if you like that humor you might want to give this one a try. The subject matter and humor also made me think of Sex and the City, Mindy Kaling, Lena Dunham, and Cora Carmack’s Losing It. Though Virgin is an adult book, I’d say this one definitely has YA appeal as well. Since this book is so witty I felt the pressure to be funny in this review, but I’ll just have to leave that to the Ellie’s of the world.

You may notice this book has a bunch of different covers- and in fact US readers have two covers to choose from. The author writes about all things book covers here. Below are the two US covers- which do you prefer?

End of Year Reading Goals
Mailbox Monday (111)
TTT: Books on My Winter TBR
Aristotle and Dante Discover the Secrets of the Universe Audiobook Review and Giveaway
The Farm by Emily McKay Blog Tour and Giveaway