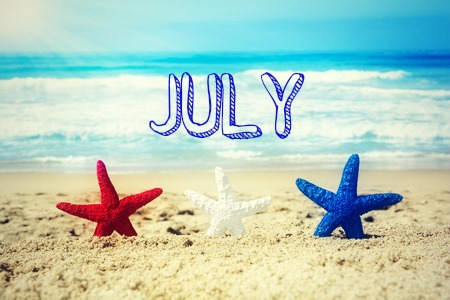 Happy July! It’s getting hot out here! I’m not one to read by the beach really- the air-conditioned indoors suits me just fine. This month there are some awesome book releases to get excited about, plus summer TV brings some returning favorites, and of course there’s Comic-Con! Here’s what’s got me excited this month:

The Way Back Home by Alecia Whitaker – July 19. In the latest Wildflower installment, singing sensation Bird Barrett hits the road and brings her brother and BFF along for the ride. She feels left out when they start to hit it off.

Flying by Carrie Jones – July 19. Mana the cheerleader has always lived a sheltered life until she finds out she’s the only one who can save the world from aliens.

Secrets, Lies and Scandals by Amanda K. Morgan – July 5. I was totally sold by the comparisons to I Know What You Did Last Summer and How to Get Away with Murder. Five teens conspire to keep their teacher’s death a secret.

Learning to Swear in America by Katie Kennedy – July 5. When an asteroid heads towards Earth, NASA calls on a young Russian physicist prodigy for help.

P.S. I Like You by Kasie West – July 26. Lily writes notes on her desk in class and a mystery classmate responds. She is totally shocked to find out the identity of this mysterious pen pal.

Defending Taylor by Miranda Kenneally – July 5. Taylor is a star student, athlete and a senator’s daughter. But one mistake threatens her future and now she’s starting over at a new school.

The Memory Book by Lara Avery – July 5. Sammie has a rare genetic disorder that causes memory loss. In the memory book she records notes on her life to her future self.

Gemini by Sonya Mukherjee – July 26. This coming-of-age is the story of conjoined twins Clara and Hailey.

The Choices We Make by Karma Brown – July 12. Kate offers to be her friend Hannah’s surrogate to help make her parenting dreams come true This emotional read is about friendship and motherhood.

Home Field by Hannah Gersen – July 26. The comparisons to My So-Called Life and Friday Night Lights piqued my interest. Dean is a football coach à la Coach Taylor who lost his wife and is now raising his three kids on his own.

Cream of the Crop by Alice Clayton – July 12. A NYC advertising exec loves cheese and falls for the owner of Bailey Falls Creamery at the farmer’s market. Book two of the Hudson Valley series.

Into the Blue by Chanel Cleeton – July 5. In this second-chance romance, Eric tries to fix his mistakes with Becca, who he left when he joined the Air Force. Book two of the Wild Aces series.

All the Time in the World by Caroline Angell – July 12. Charlotte is a musician who takes a nanny job when she experiences a setback in her composing career. It’s just supposed to be temporary but circumstances have her torn between her career and her love for the children.

You Will Know Me by Megan Abbott – July 26. In this mystery thriller, a death that occurs before an important competition rocks a gymnastics community.

Truly Madly Guilty by Liane Moriarty – July 26. A neighborhood barbecue goes awry and wreaks havoc on a community. What happened at the barbecue is slowly revealed in this past/present story.

All is Not Forgotten by Wendy Walker – July 12. Jenny is attacked at a party and afterwards is given a drug to forget the event in this whodunit.

Break in Case of Emergency by Jessica Winter – July 12. This satirical workplace comedy examines friendship and fertility and workplace dynamics.

Love, Luck & Lemon Pie by Amy E. Reichert – July 12. In an effort to spend more time with her casino-loving husband, MJ takes up poker. But when she finds out she’s a natural it takes her even further from her family.

The Legend of Tarzan – out now

The BFG – out now

Also out in July:

Don’t Think Twice – July 22, Limited. A member of a NYC comedy group gets a big break, and everyone else realizes they may not have what it takes to make it.

Café Society –  July 15 Limited, Nationwide July 29. This Woody Allen film is set in the 1930s and is about a New Yorker (Jesse Eisenberg) who leaves town to work for his talent agent uncle (Steve Carell) in Hollywood. He falls for his uncle’s secretary (Kristen Stewart).

Equals – July 15, Limited. This sci-fi romance stars Nicolas Hoult and Kristen Stewart who fall in love in a world where the emotion doesn’t exist. (Sounds like Delirium?)

Crazy Ex-Girlfriend – Netflix. Catch up with this rom-com/musical. Season 1 is now streaming.

Mr. Robot (Season 2) – USA, July 13. I’m counting down the days for this one! Hurry and catch up with season 1 – you can stream on Amazon Prime or on USA Network.

Looking: The Movie – HBO, July 23.  Looking was cancelled after two seasons and this movie helps provide some closure.

From creators Steven Zaillian and Richard Price, The Night Of is an eight-part limited series that delves into the intricate story of a fictitious murder case in New York City. The series follows the police investigation and legal proceedings, all the while examining the criminal justice system and the purgatory of Rikers Island, where the accused awaits his trial.

2 thoughts on “What’s New in July: What to Read and Watch”