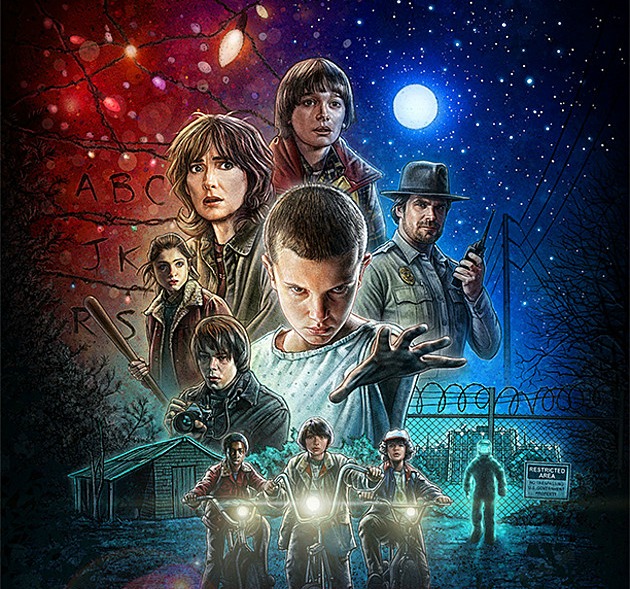 Via two great TV dramas, I’m spending the summer in small towns with big supernatural problems. In the new Netflix original series Stranger Things, a young boy and teen girl go missing, and in the 2012 French series The Returned (aka Les Revenants), long-dead citizens turn up very much alive. Both shows are full of angst and mystery, both borrow from eerie TV dramas like Twin Peaks and The X-Files, and both feature towns with menacing nearby structures that may be the sources of their problems.

Stranger Things sucks you in as a period piece: it’s set in 1983, taking you back to simpler times (Toto and The Clash) that were sometimes too simple (no mobile phones or Internet). The retro references are endless (Stand By Me, E.T., Goosebumps, The Goonies), and cast members Winona Ryder and Matthew Modine are most associated with the Eighties. Yet the story and personal drama are what stay with you; you care a lot about the wonderful characters and their ultimate destinies, whatever the decade.

After a long Dungeons and Dragons session, four tween boys part company; one of them, Will Byers, vanishes without trace. The three friends take it on themselves to find their missing pal and are helped by Eleven, a strange runaway girl with psychic powers. Meanwhile, Will’s mom Joyce (Ryder) receives mystical messages from her absent son, teenage Nancy looks for her vanished friend Barb, and local police chief Hopper investigates the shadowy premises of nearby Hawkins Laboratories, from which Eleven seems to have escaped. And some sort of creature seems to be attacking folks, but we never get a good look at it…

Meanwhile, in a small village in the Alps, the problem is not too few citizens but too many. In the French series The Returned, a handful of people who died between four and 35 years ago wander back into town, unaware of their own fates or the intervening events. You’d think this would be a reason for joy: wouldn’t you love to revisit people who left you long ago?

Yet the returned bring only pain. Teen Camille finds her now-older sister hooking up with Camille’s ex-boyfriend. Simon seeks Adele, the woman he abandoned long ago, but she’s ready to remarry and move on with her life. Young Victor is cared for by nurse Julie but begins to remember his own tragic end. Ominously, serial-killer Serge is back and his attacks start anew; clearly some folks are better off dead. These citizens’ returns seem related to the rapid loss of water from the huge dam that looms over the town…

This concept—the dead returning to a small town—has seen a lot of action in the last decade or so. Here’s a timeline of all the projects so you don’t get confused:

2004: French film They Came Back, aka Les Revenants

2013: The Returned by Jason Mott, an unrelated US novel using the same concept

2014: US TV series Resurrection, based on the Mott novel

Earlier precursors can be found in this helpful Slate article.

(Note: You may find web links that call this a “zombie” show. Rest assured that the “returned” characters are healthy, human, conscious, and not flesh-eating. They’re just back from the dead, is all.)

The French series The Returned, its US remake, and Stranger Things are all available on Netflix. That’s good news as they’re all binge-worthy! I hope these creepy tales of paranormal people in spooky small towns bring some much-needed chills to your sweltering August nights.

One thought on “SOULS LOST AND FOUND: Stranger Things and The Returned”