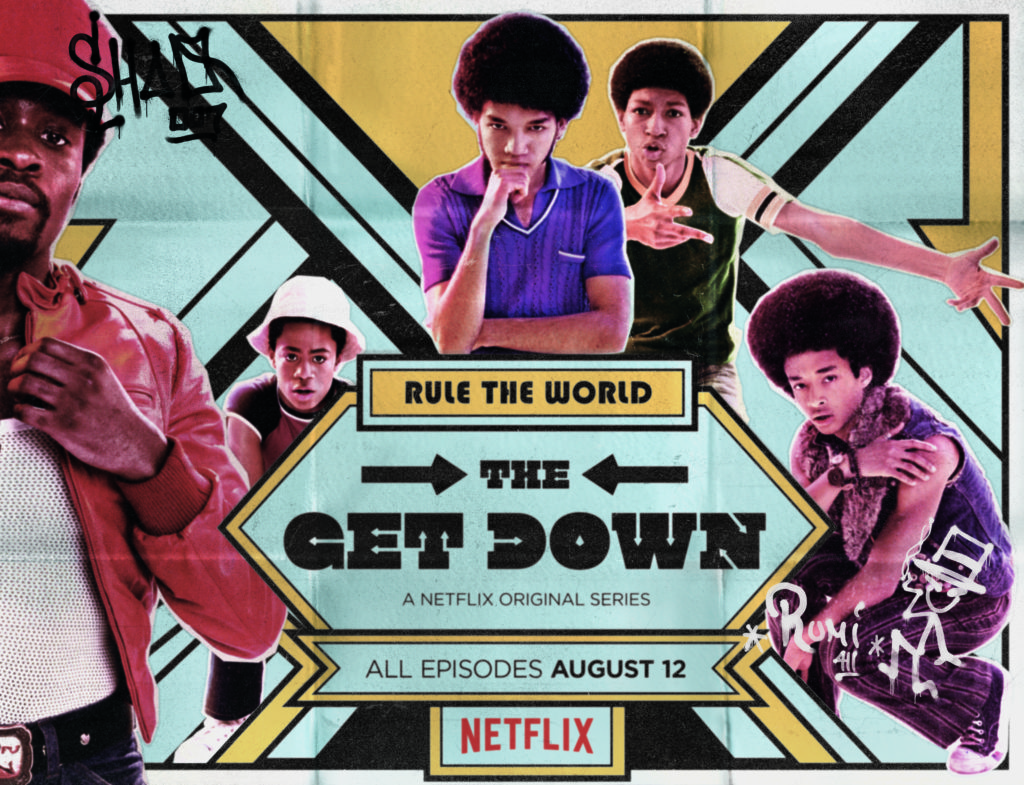 In director Baz Luhrmann’s lavish series set in the crumbling South Bronx of 1977, a young guy and gal pursue musical stardom in the rising fields of hip hop and disco.

Reading about the early days of hip-hop, I was fascinated by tales of the financially broke yet culturally rich South Bronx of the mid-to-late 70s and its groundbreaking art, seemingly created from thin air. When I heard that Baz Luhrmann (Moulin Rouge) planned to dramatize the era—as a TV series, no less—I was ecstatic. As I’d hoped, it’s an explosion of color, style, music, fact, fiction, and compelling narrative. So much is crammed into the first episode that it’s frankly overwhelming, but The Get Down sets into a nice storytelling groove with the second installment.

Due to a vanishing middle-class population and dwindling taxes, New York City hit the skids in 1975, putting it on the verge of bankruptcy. In the South Bronx, things got so bad that owners of apartment buildings were torching them, fire insurance being more profitable than tenants. Yet amidst the rubble, desolation clears the way for creativity; at impromptu block parties, deejays were finding new ways to spin records and MC’s were talking over the music in a new, rhythmic style, giving birth to hip-hop. Meanwhile, the flashy dance music known as disco had taken over the clubs and radio, creating dreams of glamour and wealth far from the projects.

Enter our heroes, lovers Zeke (Justice Smith) and Mylene (Herizen F. Guardiola). Zeke’s a super-smart kid seeking verbal self-expression; he and his pals, three siblings, become fascinated with the possibilities of hip-hop. They’re thrilled to meet the legendary graffiti artist known as Shaolin Fantastic (Shameik Moore). But Shao wants to trade in his spray cans for turntables and become a deejay, so he joins Zeke and his pals in developing their rappin’ and scratchin’ skills. But soon Zeke is pressured into taking a suit-and-tie internship in the straight world. He finds himself campaigning for mayoral candidate Ed Koch, no friend to hip-hop culture!

Meanwhile, Mylene, has her own dream: becoming a disco singer like Donna Summer or (the fictional) Misty Holloway. Against the wishes of her Puerto-Rican preacher father (Giancarlo Esposito), Mylene turns to a family friend, political boss “Papa Fuerte” Cruz (Jimmy Smits), for help breaking into the music biz. Cruz calls in a favor, inviting record-producer friend Jackie to hear her sing at the church as an informal audition. But the encounter also causes old sparks to reignite between Cruz and Mylene’s mother. And when Mylene throws off her choir robes to reveal a sexy new dress, then sings a rebellious number right there at the altar, you know Daddy’s not gonna like that… but what will producer Jackie think?

Zeke and Mylene’s on-again, off-again romance isn’t too turbulent—there’s nothing really keeping them apart, and they’re mostly happy together. But it does provide a crucial mechanism for jumping between two musical genres and two cultures: the hip-hop story has mostly black characters and the disco tale is more Puerto-Rican and white, though there’s lots of crossover. The romance is especially charming as the two kids find ways to help one another’s careers. Zeke writes lyrics for Mylene’s church-audition number, while Mylene’s new disco single provides fresh beats for Zeke’s hip-hop show.

I was pleased with the period detail, the political insight, and especially the music. But it was Zeke and Mylene’s musical ambitions—and dreams of escaping the Bronx—that kept me coming back, night after night. It’s one of the most expensive TV series ever made, but thankfully, for all the effort and passion poured into it, it’s also one of the best.

For more details on The Get Down’s portrayal of disco and hip-hop, see Part 2 of this review on Cherry Stereo.

2 thoughts on “The Get Down: Big Dreams in a Broken City”