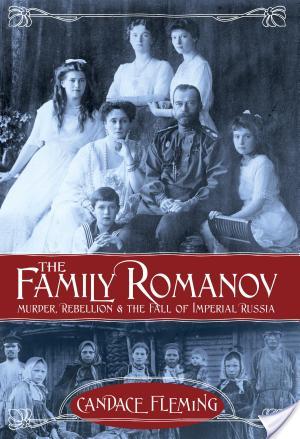 “[A] superb history.... In these thrilling, highly readable pages, we meet Rasputin, the shaggy, lecherous mystic...; we visit the gilded ballrooms of the doomed aristocracy; and we pause in the sickroom of little Alexei, the hemophiliac heir who, with his parents and four sisters, would be murdered by the Bolsheviks in 1918.” —The Wall Street Journal   Here is the tumultuous, heartrending, true story of the Romanovs—at once an intimate portrait of Russia's last royal family and a gripping account of its undoing. Using captivating photos and compelling first person accounts, award-winning author Candace Fleming (Amelia Lost; The Lincolns) deftly maneuvers between the imperial family’s extravagant lives and the plight of Russia's poor masses, making this an utterly mesmerizing read as well as a perfect resource for meeting Common Core standards.

Researching the Romanov’s by Candace Fleming

You might not guess it from looking at my kind, motherly face, but I am a nosey gossip.  And proud of it!  It’s my nosiness, as well as my need to relay all the juicy bits, that makes me a good researcher.  I adore digging around in people’s lives.  I revel in uncovering personal details and private moments.  I relish in sharing these discoveries with readers.   But it can be a long process.  Let me explain further.

Research for The Family Romanov took three years.  It also took four paths.  The first path, of course, was primary research.   After all, the heart of all research is the firsthand accounts and eyewitness testimonies of those who lived through an historical event.   For almost seventy-five years, the only primary material we had about the imperial family came from the memoirs of Russian nobility who had fled the country after Lenin’s rise to power.  Many of these reminiscences were sympathetic, painting an overly rosy picture of the imperial family.  But in 1991, with the collapse of the Soviet Union, all that changed.  Diaries, letters and other documents believed to have been destroyed began emerging from archives and museums.  Now we can read Alexei’s last diary entries for ourselves, delve into Nicholas and Alexandra’s letters, discover Olga’s poetry.  More surprising, we can hear the directly from ordinary Russians who encountered the family in their last months – Yakov Yurovsky’s chilling account of the murders; statements from guards; depositions from the priests and cleaning women who visited the Romanovs in their last hours.  Many of these documents, of course, are translations.  But not the Romanov’s material.  They wrote to each other in English.  This made my process much easier.

My second path?  Secondary source material.  There are hundreds of books about the Romanovs and the Russian Revolution (although very few for young readers).  Dozens of scholars have made the rigorous examination of Russia’s past their life’s work.  They’ve written insightful, enlightening histories.  And I read dozens of them.  For months every night I curled up with books with titles like The Russian Revolution of February 1917 or The Fall of the Romanovs.  There’s no denying that my book stands on the shoulders of these works.

My third research path led to an expert–Dr. Mark Steinberg, professor or Russian, East European and Eurasian studies at the University of Illinois at Champaign-Urbana.  During my research process, I’d read all of Dr. Steinberg’s work – his accessible histories of Russia, his impeccable translations of documents recently released from the Russian archives, his re-examination of Nicholas’ leadership abilities, his new and brilliant scholarship on Lenin, his admiration for Maxim Gorky.  Can you tell I am a fan?  So as the first draft of the book neared completion I approached him tentatively.  More than anything, I wanted him to read what I’d written.  I wanted his opinion, his knowledge.  I wrote him, explaining my purpose and my readership.   Then I crossed my fingers and hoped he’d answer.  He did… enthusiastically.   Over the course of the next six months, he read my draft, made suggestions, pointed out errors, suggested more appropriate source material and forced me to look at the evidence in different ways.  He sent along books and articles he believed would help in my work.   He re-read portions of the book I’d reworked based on his comments, and patiently answered what must have felt like a tireless stream of questions throughout the entire publication process.  That’s generosity!

My fourth path is always travel.  I believe it’s imperative to visit the places where the story happened.  An historian once said noted that “landscapes speak and houses hold memories and secrets.”  This was especially true when writing The Family Romanov.  In August 2012 I traveled to Russia where I followed in the Romanov’s footsteps, wandering the shady paths of Tsarskoe Selo and traipsing through the hallways of the Alexander Palace; visiting Rasputin’s apartment; exploring worker’s neighborhoods, Lenin’s headquarters and the dark, dank jail cells of the Peter and Paul Fortress.   Just walking the streets and feeling the air brought me closer to my biographical subjects.  And, as it turned out, it dramatically changed my understanding of the Romanov story.

At Tsarskoe Selo, I wandered down shaded lands and through lush gardens. I didn’t simply learn how the place looked.  I discovered how fragrant the lilacs are after a rain show, and how the ornamental bridge creaks when you cross it, and how cool and dark it is in the woods.  The place is vast and empty and beautiful.  But it didn’t feel lived in.  I suddenly imagined that’s how it must have felt to Alexandra.  All this for a family of seven?  It was all so grand and lonely.  No wonder she searched for something more intimate.   For the first time I understood her choice.  I understood her. No historical document could have given me that.

Wandering through the family’s rooms inside the Alexandra Palace also informed my book in surprising ways.   I expected to see small rooms furnished in ordinary – some eyewitnesses said “tasteless” – décor.  The place had been described in numerous primary sources – it’s hideous floral-patterned wallpaper, it’s cloying lilac color, its icon-cluttered bedroom walls.   So I wasn’t prepared for how homey the space was.  These were rooms people lived in.  None of it felt grand or royal.  It was a country house, rather than a palace.   Alexandra had created a nest for her family, away from the prying eyes of the world.  What mother doesn’t want to do that?  In fact, for the first time I began to admire – just a bit – her decision to turn her back on those royal trappings.  Earlier, I’d walked through her rooms at the Winter Palace – the place she abandoned for the Tsarskoe Selo – and they’d been so gorgeous, so regal, so cold.   I began to see why she wanted her family to be here instead of there.  And it made me rethink those primary sources I read earlier.  Most had criticized her choice.  They called her rooms tasteless because she didn’t want to live between marble walls.   They called her selfish for removing her family to country.  They called her crazy for choosing a simpler life.  I’d bought into their arguments until I saw the Romanov’s home.  But now I was questioning those critics.   In my mind, Alexandra was growing more nuanced… more complex… more human.

Oh, and there is one last, important discovery from that trip to the Alexander Palace.  In none of my sources had anyone mentioned how close the palace sat to the front gate.  I’d assumed it was somewhere in the middle of the park, away from prying eyes.  Not so.  The tall, main gate with its golden, double headed eagle opens directly onto the palace’s circular driveway.  Every day the family could look through its iron grillwork to the town of Tsarskoe Selo just on the other side.  It gave me pause.  The family was so close to it’s people.  They were right there, just on the other side of the gate.  The Romanovs could look out their windows and see them.  They could hear their voices from the palace balcony.  They could smell their cooking.  They really weren’t as physically removed from the people as sources led me to believe. And that gave me pause.  Why, I wondered, didn’t the Romanovs feel more attachment to their subjects?  The question led me down entirely new paths of thought.   And it eventually led to the book’s inclusion of first hand worker and peasant accounts under the title, “Beyond the Palace Gates.”

Thanks so much, Candace, for giving us a behind the scenes look at all the blood, sweat, and tears that went into The Family Romanov! I think that your self-described love of gossip is part of the reason so many readers have devoured this book. You really do make this subject sound fascinating and your enthusiasm for the project shines through. Your gorgeous pictures are a real treat too.

The Family Romanov is on sale now and it should appeal to YA readers, history buffs and new scholars alike.

3 thoughts on “Blog Tour: The Family Romanov by Candace Fleming”