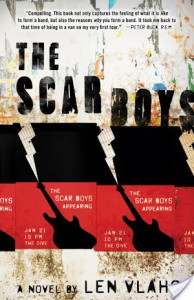 A severely burned teenager. A guitar. Punk rock. The chords of a rock 'n' roll road trip in a coming-of-age novel that is a must-read story about finding your place in the world...even if you carry scars inside and out. In attempting to describe himself in his college application essay--help us to become acquainted with you beyond your courses, grades, and test scores--Harbinger (Harry) Jones goes way beyond the 250-word limit and gives a full account of his life. The first defining moment: the day the neighborhood goons tied him to a tree during a lightning storm when he was 8 years old, and the tree was struck and caught fire. Harry was badly burned and has had to live with the physical and emotional scars, reactions from strangers, bullying, and loneliness that instantly became his everyday reality. The second defining moment: the day in 8th grade when the handsome, charismatic Johnny rescued him from the bullies and then made the startling suggestion that they start a band together. Harry discovered that playing music transported him out of his nightmare of a world, and he finally had something that compelled people to look beyond his physical appearance. Harry's description of his life in his essay is both humorous and heart-wrenching. He had a steeper road to climb than the average kid, but he ends up learning something about personal power, friendship, first love, and how to fit in the world. While he's looking back at the moments that have shaped his life, most of this story takes place while Harry is in high school and the summer after he graduates.

In The Scar Boys, a burn victim finds solace in a punk rock band. Harry recounts his experiences being a target of bullies and the aftermath of the attack that left him scarred. He attempts to put his life into words in a 250-word college essay, but finds he has a lot more to say.

Harry has always been a target of bullies. After an incident left him badly burned, the scars left behind made him even more of an outsider. One boy, Johnny, stood up for Harry and took him under his wing. They bond over music and decide to form a punk band, The Scar Boys. It’s the early 80s and there’s an explosion hardcore punk bands, and The Scar Boys want to be a part of it. Plus, Harry gets to try on a different persona onstage – one that hides his scars.

Johnny is the frontman and calls all the shots. Their four-piece also includes drummer Richie, and Cheyenne, a girl bass player. Johnny is good and bad for Harry. He helps bring him out of his shell, and he stands by him when others keep him at arms length. But at the same time he seems a little sketchy and that maybe he doesn’t always have Harry’s back.

The band goes on a van tour after high school graduation, playing clubs like CBGB’s and other small clubs in surrounding cities. Life on the road can be rough, and circumstances bring some unpleasant memories to Harry. He still has some emotional scars to tend to.

This coming-of-age is a nod to 70s and 80s bands and how music is such a savior during high school years. I loved the song lyrics quoted at the beginning of the chapters and recognized a lot of the bands, being a child of the 80s myself. The story is relatable to anyone though; so don’t let the setting put you off.

I alternated reading and listening to this book. Lincoln Hoppe reads the audiobook and does a fine job. His matter-of-fact delivery is in line with the tone of the book, and his voice became Harry to me. Hoppe’s careful delivery was clear and easy to listen to, though the pacing was a little slow for my taste. One of the Scar Boys songs is actually performed and included in the audiobook so that was a nice bonus. Check out an audiobook excerpt:

Since music is such a big part of the book it makes sense that there’s a book playlist to go with the songs referenced in the chapter headings:

Len Vlahos’ debut is a satisfying and emotional read that’s perfect for fans of music-centered YA. The Scar Boys is a finalist for the William C. Morris Award for debut YA fiction.

Between Shades of Gray by Ruta Sepetys: Audiobook Review

One thought on “Book Review: The Scar Boys by Len Vlahos”