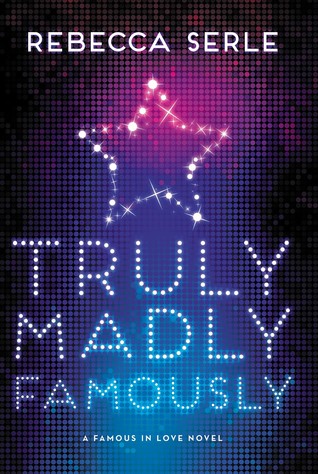 Also by this author: Famous in Love

In this romantic sequel to Famous in Love, new Hollywood "It Girl" Paige must navigate love with her co-stars, both on and off screen and all in the public eye.
Lights, camera, love!
After being plucked from obscurity, Hollywood's newest starlet, Paige Townsen, has a hit film to her name and Rainer Devon on her arm. But being half of the world's most famous couple comes with a price, and soon Paige finds herself dodging photographers; hiding her feelings for her other costar, Jordan Wilder; and navigating tabloid scandals that threaten to tear her and Rainer apart-and end her career as quickly as it began.
Rebecca Serle's sequel to Famous in Love is filled with the kind of celebrity drama and swoon-worthy romance fit for the silver screen.

Truly Madly Famously is the second book in Rebecca Serle’s Famous in Love series. This delicious romantic series follows actress Paige Townsen on her road to superstardom. Paige is fronting a hit blockbuster book to movie trilogy (think Twilight) that’s all about a love triangle. The love triangle leaps from page to screen to real life as Paige’s life mirrors her character’s situation. Paige made her choice between costars Rainer and Jordan in Famous in Love, but will it stick for the sequel?

Since Famous in Love came out last year there has been some big news. It’s in development as an ABC Family TV series! Starring Bella Thorne as Paige, this series is coming to you from the team behind the show Pretty Little Liars. I for one can’t wait!

The book Truly Madly Famously picks up where Famous in Love left off. The movie Locked is a hit and Paige, Rainer and Jordan are traveling the world promoting the film. Even though Paige chose between the two guys vying for her heart- she still has mad chemistry with them both, which makes for some awkward situations.

Paige is also experiencing the ups and downs of the A-list life. Who is selling her secrets to the press? How can she get more comfortable in front of the camera? Can she still go for indie-type films now that she’s a superstar? She gets some on the job training on navigating these new waters with actress and new confidante Alexis.

Like any big teen movie with a love triangle, the stars of Locked are up for the award of Best Kiss at the MTV VMA’s. Who will win? Will they kiss when they accept the Golden Popcorn award or tease the audience à la Robsten?

Though there are many chapters devoted to the infamous love triangle, Paige also shows some personal growth in the story and doesn’t let fame go to her head. She makes some famous girlfriends and it’s great to see them have each other’s backs. No backstabbing here! Even the so-called villain in this story gets some redemption.

This book was even more of a blast to read than Famous in Love. The Hollywood setting provides lots of opportunity for drama, and the Paige/Jordan/Rainer love triangle is as addictive as any YA love triangle I’ve seen. (Obviously you have to be cool with love triangles to get along with this series)

Since the Famous in Love series follows a book/movie trilogy I assume we get to read at least one more book. There is a placeholder 2016 book listed on Goodreads so hopefully they won’t leave us hanging here. It feels like there is more story to tell and I’m eager to see how it plays out. If you like Hollywood celebrity stories, love triangles, and addictive contemporary YA then this series is for you. Check it out before the series comes to a TV near you!