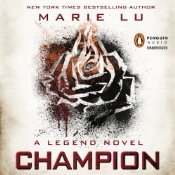 June and Day have sacrificed so much for the people of the Republic - and each other - and now their country is on the brink of a new existence. June is back in the good graces of the Republic, working within the government's elite circles as Princeps Elect while Day has been assigned a high-level military position. But neither could have predicted the circumstances that will reunite them once again. Just when a peace treaty is imminent, a plague outbreak causes panic in the Colonies, and war threatens the Republic's border cities. This new strain of plague is deadlier than ever, and June is the only one who knows the key to her country's defense. But saving the lives of thousands will mean asking the one she loves to give up everything he has. With heart-pounding action and suspense, Marie Lu's best-selling trilogy draws to a stunning conclusion.

I faced my fears and finally finished the Legend trilogy! I’ve had end-of-series phobia lately, and Allegiant didn’t calm my fears. I know it doesn’t make sense for dystopian series’ to wrap everything up neatly with a HEA. But as long as the conclusion makes sense with the rest of the series I’m okay. The ending of Champion was just perfect though, a little open ended, bittersweet, and satisfying. If you’ve been wondering whether to read this series or not I’d say proceed with confidence.

Marie Lu does a great job getting the reader up to speed with this installment and easing back into the story. The last book, Prodigy, ended with a game changer, and in Champion we see the after effects. Will the peace treaty hold, and can a plague threat be stopped? Day and June have new roles in Champion, and are not sure where they fit in each other’s lives now. Day in particular worries about sick little brother Eden, and his own poor health. Meanwhile, June is working for Anden as his Princeps-Elect and missing her time on the field.

This series has great world building, action, and suspense, as well as a dystopian super couple. I love Day and June together, and the paperclip rings and respect they have for each other. It’s always been them against the world, but this time they face their biggest trials yet. I was on pins and needles at the end there. Both characters show a lot of growth throughout the series.

I listened to the audiobook of Champion, after liking Steven Kaplan and Mariel Stern’s narration so much in Prodigy. This book has alternating Day and June chapters and happily dual narrators as well. Steven Kaplan in particular is a wonderful Day and conveys his cockiness, rebellious nature, loyalty, and uncertainty. Mariel Stern is a good fit for June, and shows her fighter nature, struggles, and analytical side. Both narrators make the listener feel the emotion of the story, and their pace and tone build with the action of the book. The physical books are lovely with the different color text for the alternating Day/June chapters, but the audio is quite powerful too.

Though I’m content with the way the series ended, I’d be lying if I didn’t say I want to see what happens next. But Marie Lu has something new up her sleeve- coming up next is The Young Elites, due out this fall.