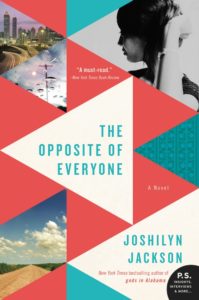 A fiercely independent divorce lawyer learns the power of family and connection when she receives a cryptic message from her estranged mother in this bittersweet, witty novel from the nationally bestselling author of Someone Else’s Love Story and Gods in Alabama —an emotionally resonant tale about the endurance of love and the power of stories to shape and transform our lives.

Born in Alabama, Paula Vauss spent the first decade of her life on the road with her free-spirited young mother, Kai, an itinerant storyteller who blended Hindu mythology with southern oral tradition to re-invent their history as they roved. But everything, including Paula’s birth name Kali Jai, changed when she told a story of her own—one that landed Kai in prison and Paula in foster care. Separated, each holding secrets of her own, the intense bond they once shared was fractured.

These days, Paula has reincarnated herself as a tough-as-nails divorce attorney with a successful practice in Atlanta. While she hasn’t seen Kai in fifteen years, she’s still making payments on that Karmic debt—until the day her last check is returned in the mail, along with a mysterious note: “I am going on a journey, Kali. I am going back to my beginning; death is not the end. You will be the end. We will meet again, and there will be new stories. You know how Karma works.”

Then Kai’s most treasured secret literally lands on Paula’s doorstep, throwing her life into chaos and transforming her from only child to older sister. Desperate to find her mother before it’s too late, Paula sets off on a journey of discovery that will take her back to the past and into the deepest recesses of her heart. With the help of her ex-lover Birdwine, an intrepid and emotionally volatile private eye who still carries a torch for her, this brilliant woman, an expert at wrecking families, now has to figure out how to put one back together—her own.

The Opposite of Everyone is a story about story itself, how the tales we tell connect us, break us, and define us, and how the endings and beginnings we choose can destroy us . . . and make us whole. Laced with sharp humor and poignant insight, it is beloved New York Times bestselling author Joshilyn Jackson at her very best.

Hello dear readers & welcome to my stop on The Opposite of Everyone blog tour! The Opposite of Everyone is Joshilyn Jackson’s latest book, and it’s now available in a shiny new paperback edition. This was my first experience with Joshilyn Jackson’s writing, and I really enjoyed myself with this one. This novel features a ruthless and independent divorce attorney starring in a family drama of her own.

In The Opposite of Everyone, Paula Vauss, our fearless heroine, gets some unexpected news and a visit from a brother she never knew existed. And more siblings may be out there as well. Paula and her mother are estranged, and a mysterious note from her sets her off on a journey to the past.

Paula (originally named Kali Jai by her free-spirited mother Kai) has unresolved feelings about her mother. She feels guilt about the circumstances that got her sent to prison and hurt over their lost relationship. As she reflects on their years apart, she recalls the Hindu mythology stories her mother recounted. She’s used to being on her own and putting up defenses, but recent life events have her questioning whether it’s time to let others in. Along for the ride is Birdwine, Paula’s ex, and a private investigator.

The mystery, relationships, and mother-daughter dynamics kept my eyes glued to the page, and I also enjoyed seeing Paula strut her stuff as a divorce attorney. Some of the divorce cases were wild- “murder kittens,” anyone?

This juicy character-driven novel was a page-turner, and I can’t wait to catch up with more of Joshilyn Jackson’s books. Have you read any of Jackson’s work – which one do you recommend I read next?

The Opposite of Everyone is now available in paperback. Find it: HarperCollins | Amazon | Barnes & Noble | Goodreads

Joshilyn Jackson is the New York Times bestselling author of six previous novels, including gods in Alabama, A Grown-Up Kind of Pretty, and Someone Else’s Love Story. Her books have been translated into a dozen languages. A former actor, she is also an award-winning audiobook narrator. She lives in Decatur, Georgia, with her husband and their two children.

Follow along with The Opposite of Everyone blog tour:

6 thoughts on “Blog Tour: The Opposite of Everyone by Joshilyn Jackson”